Opening this collection of news, reports, documentaries and pictures on the 10 years passed by from Iraq’s invasion with this -in Grady Carter’s words- «rather controversial documentary about the War in Iraq, and what is described as the false pretenses that caused our nation to enter our most unpopular war since Vietnam», I am consciously sending a message: the same message  I have repeated in many of my writings and classes for years.

It comes from William Fulbright’s The propaganda machine, his forceful attack against Johnson’s Vietnam  policy when he saw that US policy, even the one sold in the Capitol, where Fulbright was a big shot in the Democratic party, was based on mountains of lies. Let me underline Grady Carters’s justificacion when he decided to download the documentary «Hubris» (Full Film) Iraq War Documentary – Rachel Maddow (02-18-2013):

I am posting this with no intention of insulting members of the military, in fact it’s the exact opposite. After watching films like this and Academy Award nominee «No End in Sight» I can’t help but be discouraged by the lack of leadership in a time of national and global crisis. I do not own this, all rights reserved to NBC Universal, but Rachel always asks for people to put her show on YouTube, so I believe I have permission to post this.

A decade after the US-led invasion of Iraq, many wonder whether a conflict that took more than 150,000 Iraqi and 4,400 American lives, wounded or displaced hundreds of thousands more, and cost over $2 trillion was worth the effort. Can the US repair its damaged reputation in the region, and will Iraqis be able to curb internal violence and establish a stable political order?

Richard N. Haass Dec. 13, 2010 The Endgames in Iraq and Afghanistan

FP and RAND teamed up for a group talk on the war in Iraq, which began 10 years ago this month. Over four hours on March 13, some of the biggest names associated with the war — from Gen. John Allen, who was instrumental in the Anbar Awakening, to Steve Hadley, national security adviser under Bush 43 — sparred over questions that, a decade later, clearly still touch a lot of nerves. There were sharp exchanges over everything from failed reconstruction efforts, to whether al Qaeda really was in Iraq, to whether bad intelligence caused the war. Some quotables:

Hadley, on al Qaeda in Iraq and the justification for war: «You know, Stan McChrystal’s book is very interesting because it makes crystal clear that what Iraq became was a struggle against al Qaeda in Iraq. And I remember in the summer — and I’m not getting partisan here — I remember in the summer of 2008 when President Obama, then candidate Obama, said al Qaeda was the ball, the Bush administration took their eye off the ball, and they went into Iraq, but al Qaeda isn’t in Iraq, al Qaeda is in Afghanistan. And I asked Mike McConnell at the time — the DC at the time — ‘How many al Qaeda fighters are in Afghanistan today and how many are in Iraq?’ And he said, ‘In Iraq, there’s about 15,000, down from about 20 [thousand], and in Afghanistan there’s 200.’ So you can say we failed to foresee that Iraq would become the frontline of al Qaeda’s struggle against the United States, and I think we did not have the right strategy or the right resourcing in the end of the day to deal with that problem..»

Hadley also said: «No one from the intelligence community, anyplace else ever came in and said, ‘What if Saddam is doing all this deception because he actually got rid of the WMD and he doesn’t want the Iranians to know?’ Now somebody should have asked that question. I should have asked that question. Nobody did. Turns out that was the most important question in terms of the intelligence failure that never got asked.»

John Allen, making the case that the U.S. will not put boots-on-the-ground in another theater for 20 years: «Clearly a 50-nation coalition right now in Afghanistan has been important to us, but my guess is… that it will be 20 years before we undertake something like this again. It’s going to be a long time before NATO is going to be interested probably in undertaking something that could look like this again.»

And Allen on whether U.S. money was well spent in the field: «Something I worry about increasingly as time goes on is the sense that the development strategies in Iraq and now Afghanistan have failed. And that the development dimension of what we have attempted to undertake was either the wrong approach or just flawed from the beginning.»

Doug Feith, on pre-war intelligence: «I think that one of the lessons is that we should just be, in general, more skeptical about intelligence and make sure that – you have to rely on intelligence, its as good as it can get, and you try to improve it, but whenever you read it, it should be read very skeptically.»

And Feith said on civilian reconstruction efforts, historically: «The basic way it happens is you start with the Keystone Cops, always. After a while we get smart, and you get some systems in place, you get some experience, you start to learn what the picture is on the ground…. [S]ometimes a lot of what you know in advance is not only inadequate, it’s exactly wrong, as was the case in Iraq over and over again. I mean, a lot of the intelligence about Iraq was precisely wrong; it wasn’t simply less than you wanted. And so you start with the KC, you get smarter, you get better, you get skilled, you get teamwork established, and then you disband everybody. And you go to the next event and you start with the Keystone Cops again. That doesn’t quite happen with the military.»

In the previous FP-Rand debate, Steve Hadley laments over the supposedly 100 million question never seriously asked or discussed in the Bush’s White House before going into Iraq: what if Saddam Hussein didn’t want to admit that he didn’t have WMD in order to keep Iran, his historical enemy, guessing?

In his March 19, 2013 analysis of Iraq’s war for Reuters, David Rohde prefers to look at the consequences or, as the headline of his text says, «the war’s most damaging legacy».

The glaring lesson of the war is that American ground invasions destabilize the Middle East, instead of stabilizing it. The 100,000 Iraqis who perished, the 4,500 American soldiers killed and the $1 trillion spent should have halted what Tufts University professor Daniel W. Drezner has called the “creeping militarization of American foreign policy.” Instead, the civilian American institutions that failed us before Iraq have grown even weaker.

The State Department is the first example. Drezner correctly argues that as the Pentagon’s budget has ballooned in the post-9/11 decade, so has its influence over American foreign policy. Too many former generals, he contends, have occupied foreign policy important positions.

That trend has slowed in the second Obama administration, but the budget, planning capabilities and training programs of the State Department are still laughably small compared with those of the U.S. military. Money equals power, influence and a seat at the table in Washington…. READ MORE

As important or maybe more important than the political-military legacy are the lessons learnt by the Media of its catastrophic failure to check and filter through the basic traditional principles of the best reporting the official line on Iraq.

Jonathan Landay, one of the Knight-Ridder reporters whose pre-invasion work questioning the WMD evidence received little attention, said social media might have made a difference. But he hesitated to say Twitter would have silenced the White House.

“Had the New York Times, Washington Post and the networks done the kind of reporting that we had, could the administration have been able to take the country to war? I don’t know,” Landay said in an email message. “But social media would have brought far more attention to our work, and perhaps more journalists would have followed our lead.” 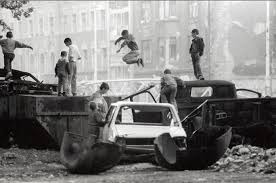 Iraq: After the Americans
Plus
Powering up after a decade down
Series of bomb blasts kill scores in Baghdad
Maliki’s Iraq: Rape, executions and torture
War’s legacy of cancer
DP’s finding little refuge in Iraq
……AND MORE LINKING HERE
YouTube Iraq War: 10th Anniversary from Twitter

@GottaLaff Thanks for sharing the truth, and following the $, for this sad 10th Anniversary of the Iraq War. http://www.youtube.com/watch?v=qxhIkzTg14M …#IraqOil7:39 PM – 19 Mar 13

Inspired by @RumsfeldOffice tweet on 10th anniversary of Iraq War, would like to remember this courageous Iraqi hero http://www.youtube.com/watch?v=OM3Z_Kskl_U … 6:26 PM – 19 13

Decade: The U.S. intervention in Iraq — and its toll

It has been a decade since American forces entered Iraq. The long intervention produced these enduring images

Does Iraq have a future? Watch/Listen to John Simpson

BBC Related Content
War and words: How the language of conflict and diplomacy has changed in the 10 years since the Iraq invasion
Iraq in numbers. Better or worse 10 years after the invasion?
Iraq country profile – overview
Iraq profile – timeline
Doctors in Basra report rise in birth defects
Iraq 10 years on: Recovering the lost treasures of Iraq