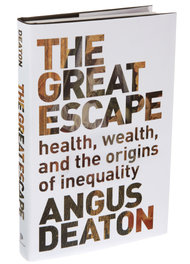 A Surprising Case Against Foreign Aid

IN his new book, Angus Deaton, an expert’s expert on global poverty and foreign aid, puts his considerable reputation on the line and declares that foreign aid does more harm than good. It corrupts governments and rarely reaches the poor, he argues, and it is high time for the paternalistic West to step away and allow the developing world to solve its own problems.

It is a provocative and cogently argued claim. The only odd part is how it is made. It is tacked on as the concluding section of “The Great Escape: Health, Wealth, and the Origins of Inequality” (Princeton University Press, 360 pages), an illuminating and inspiring history of how mankind’s longevity and prosperity have soared to breathtaking heights in modern times.

Mr. Deaton is the Eisenhower Professor of Economics and International Affairs at Princeton. He has spent decades working with the World Bank in creating basic yardsticks for measuring global poverty and with the Gallup Organization in creating survey-based measures of well-being.

The “great escape” of the title, he writes, is “the story of mankind’s escaping from deprivation and early death.” His book gives a stirring overview of the economic progress and medical milestones that, starting with the Industrial Revolution and accelerating after World War II, have caused life expectancies to soar… MORE