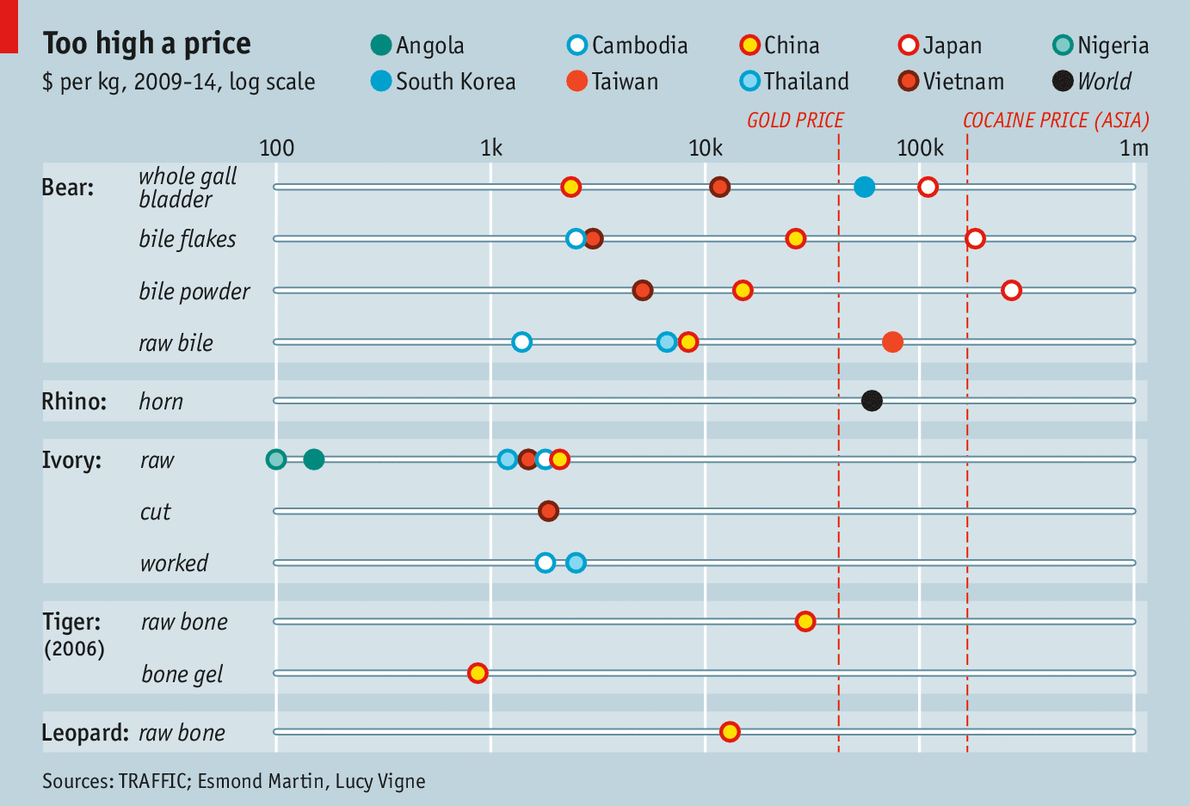 AT $10 billion a year, illegal wildlife makes up the world’s fifth-largest illicit market behind drugs, counterfeit products, trafficked people and smuggled oil. An intergovernmental conference in Geneva from July 7th-11th revealed the special worries about ivory smuggling in Thailand, rhino-horn trafficking through Mozambique and trade in tiger parts across South and South-East Asia.

According to TRAFFIC, a lobby group, the street value of rhino horn is $60,000 per kilo—more than the price of gold (see chart). Gram for gram, bear-bile flakes or powder sell in Japan for more than cocaine in Asia. Booming demand from Asia’s growing middle classes is pushing some species close to extinction. As supply dwindles, prices rocket, which tempts criminal gangs to sink their claws in even further.

Elephant ivory is valued for aesthetic reasons. Demand for rhinoceros horns, the paws and bile of Asiatic black bears and sun bears, tiger bones and penises, and deer musk, is stimulated by the healing powers ascribed to them in traditional Chinese medicine. Rhino-horn shavings boiled in water are said to cool and to cure headaches; the brew is akin to fingernail clippings in water (both are mainly keratin, an indigestible protein). Bear bile does help with gallbladder and liver problems—but no more than the synthetic version of ursodeoxycholic acid, its main component.

In February 42 countries, including China and Japan, and the European Union signed a declaration against trade in illegal wildlife products. Chinese law punishes the purchase or consumption of endangered species with up to ten years in jail. But in May, when Philippine forces seized a Chinese vessel carrying sea turtles, giant clamshells and live sharks off the disputed Half Moon Shoal, China expressed outrage at the “provocative action”—not the illegal cargo.

Correction: This article initially stated that a gram for gram, whole bear’s gall bladder sold for more than six times as much as cocaine. It actually costs slightly less. This has been corrected.