March 15, 2013 marked the second anniversary of the start of the uprising against the Assad regime in Syria and on March 20 it will have been a decade since the start of the Iraq war, a conflict that still reverberates around the region and the world. Abigail Fielding-Smith, FT correspondent in Damascus; David Gardner, senior international affairs commentator, and Roula Khalaf, Middle East editor, join Shawn Donnan. (ft.com/podcasts)

In this EA Worldview, Scott Lucas reflects on the kaleidoscopic civil war in Syria – an ever-shifting, complex and unpredictable conflict that defies easy definition and simple resolution. It’s not a straightforward case of good guys versus bad guys, as much many both inside and outside of Syria might want it to be. (Published on March 13, 2013

On the second anniversary of the uprising against the Assad regime, Lucas’ thoughts about the current situation:

1. NOSTALGIA ABOUT THE PAST

2. THE KALEIDOSCOPE OF A CIVIL WAR

«There is no way to reduce this to a good v. bad scenario, even if you think one should be imposed.»

Setting up for state failure in Syria

Western powers have failed Syria. Between a half-hearted humanitarian strategy and a short-sighted plan to perpetuate a war fought by opposition proxies, Europe, the US and key Gulf states are fuelling the fire of Syria’s destruction.  No equivocating: Syria’s tragedy is Assad’s creation.

In fighting the irreversible political transformations in the region, the Assad regime has squarely set Syria on course for collapse. Between a choice to confront the legitimate demand of its long marginalised citizens or to give no quarter to peaceful protest, Assad’s government chose the latter .…read more

Special Reports: France: We’re out of options with Syria

Civil war in Syria entered its third year this month. The United Nations estimates that at least 1 million Syrians have been displaced and more than 70,000 people have died as a result of fighting that grew out of anti-government protests... read more

(Reuters) – The U.S. war in Iraq has cost $1.7 trillion with an additional $490 billion in benefits owed to war veterans, expenses that could grow to more than $6 trillion over the next four decades counting interest, a study released on Thursday said.

The war has killed at least 134,000 Iraqi civilians and may have contributed to the deaths of as many as four times that number, according to the Costs of War Project by the Watson Institute for International Studies at Brown University.

When security forces, insurgents, journalists and humanitarian workers were included, the war’s death toll rose to an estimated 176,000 to 189,000, the study said.

The report, the work of about 30 academics and experts, was published in advance of the 10th anniversary of the U.S.-led invasion of Iraq on March 19, 2003.

It was also an update of a 2011 report the Watson Institute produced ahead of the 10th anniversary of the September 11 attacks that assessed the cost in dollars and lives from the resulting wars in Afghanistan,Pakistan and Iraq.

The 2011 study said the combined cost of the wars was at least $3.7 trillion, based on actual expenditures from the U.S. Treasury and future commitments, such as the medical and disability claims of U.S. war veterans.

That estimate climbed to nearly $4 trillion in the update....(read more)

Iconic faces of the Iraq war explained – in pictures

What became of the people whose faces defined the conflict in Iraq? Guardian reporters track down the people behind the images and hear their stories

Faces of war: hear the stories behind iconic images of Iraq conflict

They were the images that defined the conflict in Iraq: the pain of ordinary Iraqi civilians, the exhaustion of American soldiers. But what became of them? From Fort Polk, Louisiana, USA, to Tal Afar, northern Iraq, Guardian reporters track down the people behind the images and hear their moving stories (Francesca Panetta, Mona Mahmood, Chris McGreal, Martin Chulov, Peter Beaumont, Nina Perry, Guardian Interactive team, Chris Fenn: guardian.co.uk, Friday 15 March 2013 07.15 GMT) 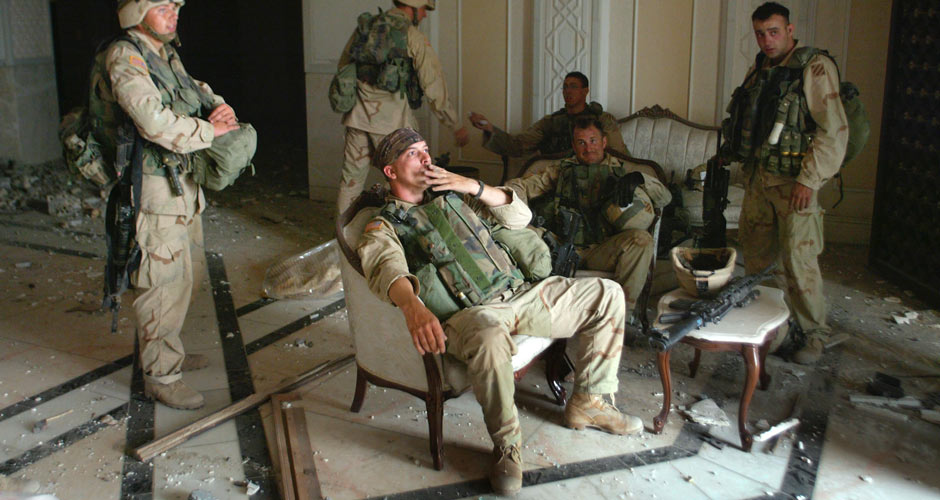 Baghdad, 10 years after the Iraq invasion – in pictures

In March 2003, the US-led coalition invaded Iraq. The Observer’s foreign affairs editor, Peter Beaumont,  was there – and has visited at regular intervals since, reporting and taking photographs. A decade on from the fall of the capital, he returns with his camera to find a changed city post-Saddam. This is the firfst of them. 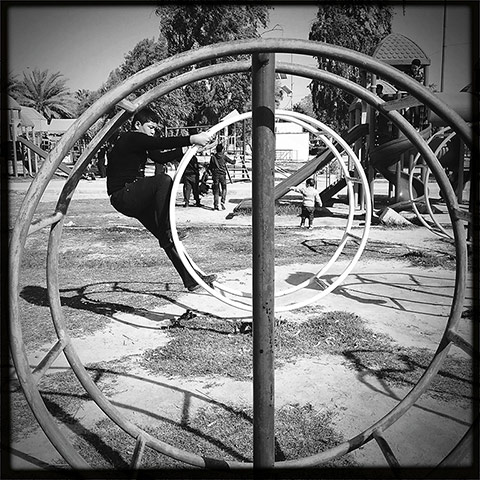 A boy plays on a climbing frame in the Zawara amusement park in Baghdad on a Thursday afternoon, the beginning of the weekend. Hugely popular, new parks and public spaces have been springing up across the city

I don’t remember the number of books on Iraq I’ve read since 2003, but I’ll never forget this one, “Imperial Life in the Emerald City: Inside Iraq’s Green Zone.” edited in Spanish in 2008. On March 15, 2013, the Washington Post’s senior correspondent and associate editor signed an interesting analysis  of the last ten years in Iraq under the headline Five myths about Iraq.

Ten years ago, on the eve of the U.S. invasion of Iraq, the assumptions many Americans held about the coming war, fed by rhetoric from the George W. Bush White House, turned out to be wildly inaccurate. Saddam Hussein, as we now know, did not possess weapons of mass destruction. The conflict would not end quickly. And the cost of the war — in lives and dollars — would far eclipse expectations. Today, a new set of beliefs defines many discussions about the war and its aftermath. Are they just as wrong?

3. Iraq is a democracy

4. Iraq is in Iran’s pocket

5. The Americans have all left

Ten years after the invasion, did we win the Iraq war?

How the Iraq war hurt Republicans

Iraq, The Biggest Blunder America Ever Made

Not to put too fine a point on it, but the invasion of Iraq turned out to be a joke. Not for the Iraqis, of course, and not for American soldiers, and not the ha-ha sort of joke either. And here’s the saddest truth of all: on March 20th as we mark the 10th anniversary of the invasion from hell, we still don’t get it. In case you want to jump to the punch line, though, it’s this: by invading Iraq, the U.S. did more to destabilize the Middle East than we could possibly have imagined at the time. And we — and so many others — will pay the price for it for a long, long time …read more