According to the 37th END OF YEAR 2013 survey of nearly 68,000 people in 65 countries by WIN/Gallup International Association, although far from perfect and in spite of the many demonstrations in many countries against those in power, the worst of the crisis seems to be behind and a majority does answer positively to the question.

About the End of Year Survey

As 2013 drew to a close, pollsters were finding out how people across the world felt about the state of their lives and the coming 12 months. Here, the BBC’s world affairs correspondent, Paul Adams, analyses the findings.

Is the world getting better? Since 1977, opinion pollster Win/Gallup International has been asking this question of people around the world. Do responses for 2013 paint an optimistic picture?

There has been no big change this year, and the global figure is down from highs in 2004-5, but the upward trend since polling began in 1977 is pretty clear. Almost 50% say 2014 will be better than 2013. You have to go back to 1990 for the last time more people predicted a worse year than a better one.

Dr Ijaz Gilani, vice-president of Win/Gallup International, says a global decline in the role of the state has gradually empowered the ordinary citizen.

What about that dip after 2005? Rising commodity prices in the middle of the last decade put a huge dent in global optimism before the effects of the financial collapse of 2008 began to ripple out across the world. Remember, 85% of the world’s population lives outside North America and Europe.

One other thing: feeling good about 2014 isn’t necessarily the same as thinking it will bring economic prosperity: across the world, 32% think it will. And 30% think it won’t, according to Win/Gallup. 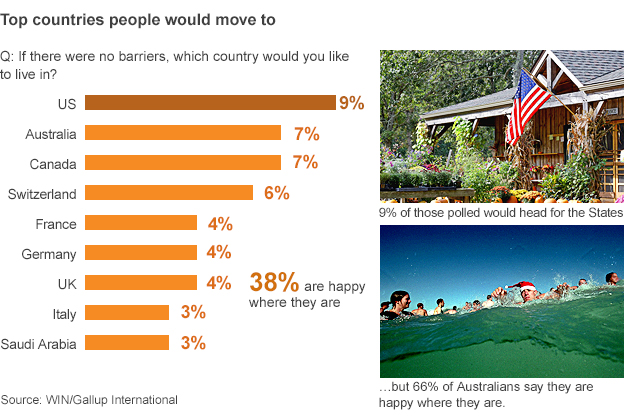 Home is where the heart is? A healthy plurality of people would prefer to stay put, but for those seeking sanctuary or opportunity abroad, Australia and Canada are now almost as desirable as the United States.

The American Dream is alive but less compelling. Washington’s heated immigration debate has perhaps begun to convey an impression that the world’s «huddled masses» are not as welcome as they once were. In the Middle East and North Africa, where post-Arab Spring turbulence creates high levels of political uncertainty, a surprisingly high number of people don’t want to move. Among those who do, Saudi Arabia is more appealing than America.

More bad, but not entirely surprising, news for the US. The world’s sometimes eager, sometimes reluctant policeman is the subject of widespread animosity. Predictable in some areas (the Middle East and North Africa) but less so in others. Eastern Europe’s 32% figure may be heavily influenced by Russia and Ukraine, but across most of Western Europe there are also lots of figures in the high teens.

In the Americas themselves, decades of US meddling have left an awkward legacy. Its neighbours, Mexico (37%) and Canada (17%), clearly have issues. Even 13% of Americans see their own country as a danger. Pakistan’s unenviable position as a (distant) second in the global threat stakes probably has a regional explanation – 15% of the world’s population lives in its neighbour and arch-rival, India… MORE

In this special edition, CFR.org Editor Robert McMahon and CFR’s Director of Studies James Lindsay preview major world events in the coming year: U.S. fiscal problems drag on; Iranian nuclear talks remain a global priority; a year of pivotal elections and domestic discontent; a new world of energy emerges; disputes in the East China Sea continue to raise tensions; and the race for the Arctic intensifies. 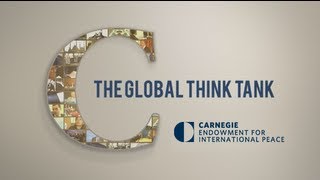 The Year the EU Sets Its Future Course

Ten Trends That Will Shape Asia in 2014

A Year of Too-Great Expectations for Iran

Dealing With the New Normal in U.S.-Russian Relations

The Year of the Voter in South Asia

Year Four of the Arab Awakening

Find out what our experts think 2014 has in store for the global political economy and that of Africa, Asia, Europe, the Middle East, Latin America, North America and Russia/CIS 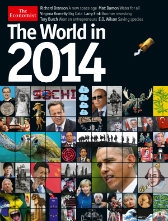 The World in 2014: annual publication of forecasts for the year ahead
THE ECONOMIST INTELLIGENCE UNIT: Asia – Key issues in 2014
All countries analysis
Risk Analysis
Predictions for 2014: the final countdown
REUTERS’ E-BOOK. Predictions 2014: Reversals and Revivals.
http://fingfx.thomsonreuters.com/2014/01/02/010734ae55.pdf

The Water’s Edge » Ten Historical Anniversaries of Note in 2014 Anniversaries are how we mark the passage time of time, celebrate our triumphs, and honor our losses. Two thousand and …

Egypt in 2014: more demonstrations to come

The Thawing Arctic: Risks and Opportunities

Prospects for the Global Economy in 2014

The Shape of Things to Come: Hot Markets to Watch

Global Summits to Watch in 2014

Cloudy with a chance of conflict

The stories that never were

Indefinite extension: Obama needs to consult before he authorizes…

9 Eerie Similarities Between 1914 And Today

In her new Brookings Essay, The Rhyme of History: Lessons of the Great War , historian Margaret MacMillan takes an in-depth look at the global tensions that led to World War I in 1914, and the stri…

Foresight Africa: Top Priorities for the Continent in 2014