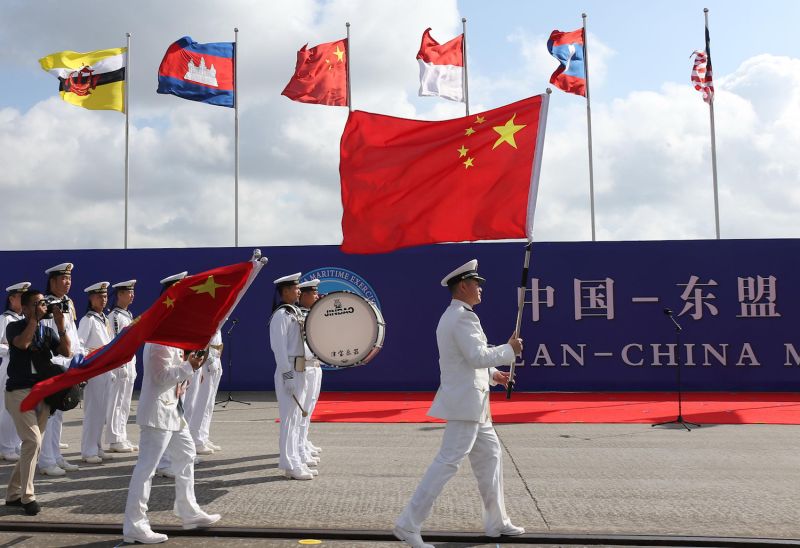 This week, the U.S. Navy conducted drills with ships from Southeast Asian countries in the Gulf of Thailand and the South China Sea—an apparent sign of Washington’s renewed interest in the region and in challenging China.

Close U.S. partners such as Singaporean Prime Minister Lee Hsien Loong have warned of growing tensions between the two superpowers and urged restraint by both sides. Washington has been deepening security and diplomatic relations in the region, even with former adversaries such as Vietnam, which has been locked in a tense maritime standoff with China since July.

In recent years, the notion of an emerging second Cold War, this time between the United States and China, has gained credence. As early as 1995, China scholar David Shambaugh warned of deteriorating relations in an article titled, “The United States and China: A New Cold War?” Last year, Cold War analyst Graham Allison, the Douglas Dillon professor of government at the Harvard Kennedy School, warned of a “new cold war,” and articles published in the Economist, Foreign Policy, the Washington Post, and across the mainstream media have built on this narrative. But the Cold War paradigm is not the best way to understand today’s strategic landscape.

The security environment is far more benign than that of the Cold War, and middle powers—countries with more moderate power and influence—have far more agency to shape great-power competition to suit their interests. Southeast Asia is a prime case in point. The region was at the heart of the Cold War era’s so-called hot wars—calamitous U.S. interventions in Vietnam, Cambodia, and Laos that have shaped the outlooks of a generation of counterinsurgency and strategic analysts in Washington. Today, it sits at the geographic nexus of Chinese and U.S. influence, and is the site of emerging military friction. But the dynamics are very different.

Characterizing U.S.-China competition in Cold War terms risks embedding a limited framework into U.S. strategic thinking. Worse still, Washington runs the repeat danger of coming to view Southeast Asian nations as dominoes that will fall to one side or the other, rather than as autonomous partners with their own divergent interests.

Today’s international security environment is far more tranquil than that of the Cold War. Unlike the devastation of the wars in Syria and Yemen, along with the humanitarian crisis associated with massive displacement, U.S.-China competition has so far been nonviolent, occurring predominantly along economic and technological axes. Compare this to the Cold War, when the United States waged a proxy war against the Soviet Union in Afghanistan, and U.S. troops fought and died in Korea and Vietnam.

Stephen Wertheim, a scholar at the Saltzman Institute of War and Peace Studies at Columbia University, warned in a recent New York Times op-ed that the emerging “cold war [with China] could plunge the United States back into gruesome proxy wars around the world and risk a still deadlier war among the great powers.” However, that outcome is far less likely now than it was during the Cold War. For one, the Vietnam War was born from a hard-fought struggle for independence from colonial occupation. Today, even the weakest powers in Southeast Asia display more ability to hedge between competing great powers.

U.S. and Chinese interference in other countries’ internal affairs is far subtler and less destructive than U.S. and Soviet methods once were—in part because of international law and the transparency born of new digital technology and expanded internet access. That is not to say that the motives of contemporary great powers are altruistic: The Trump administration vocally advocated for a quasi-coup in Venezuela and has steadfastly supported the repressive monarchy of Saudi Arabia, while Beijing doles out hefty financial support to friendly dictators who support Chinese interests, such as Hun Sen in Cambodia. The Chinese Communist Party has also overtly pressured small countries such as the Solomon Islands to abandon diplomatic ties with Taiwan in exchange for investment and infrastructure loans.

Decades ago, middle powers such as India and Pakistan could play the United States and Soviet Union off of one another to their advantage—to an extent. Under Prince Norodom Sihanouk, Cambodia successfully balanced the United States, Soviet Union, and China, preserving his country’s neutrality throughout the 1960s until Gen. Lon Nol launched a coup overthrowing Sihanouk in 1970.

Today, such countries have more options. Former U.S. Deputy Secretary of State Richard Armitage compares them to “knights” on a chessboard, as opposed to “pawns.” For example, since a military coup in 2014, Thailand has been grappling with a domestic political crisis and civil-military tensions. The Obama administration limited contact with the junta led by Gen. Prayuth Chan-Ocha and suspended security assistance. Meanwhile, Bangkok has cultivated warmer ties with Beijing, for instance by purchasing three Chinese submarines and granting Chinese telecommunications company Huawei’s bid to roll out 5G internet technology in the country. In response the Trump administration has hosted Prayuth on a White House visit in 2017 and in 2018 agreed to deepen trade ties. The United States and Royal Thai Navy coordinated closely during this week’s naval exercises in Southeast Asia.