What does Madrid offer a visitant or tourist that justifies a stay? Having lived in this city for 38 of my 60 years, plus 4 years in New York, 1 year in Elkhorn (Wisc) and many brief stays in over 20 other foreign capitals, I’ve always felt a very special homing instinct towards Madrid, but, believe me, I’d never written down or thought through the precise motivations or reasons for those feelings.

That’s why, when I saw Chris Michaud’s piece in Reuters, inside the series on tourism and travelling, on Spain’s capital, I decided to keep it and share it with anyone thinking on having a try  in this open, variegated and always changing old but, at the same time, quite new Southern European metropoli.

Despite its status as a leading European capital, land-locked Madrid has often been overshadowed as a tourist destination by the more glamorously chic Barcelona.

But its appeal to travellers is on the rise, with world class museums and dining, expansive, centrally located parks and first-rate shopping increasingly drawing visitors to its bustling thoroughfares.

With the help of Reuters’ correspondents in Madrid’s office with local knowledge, Michaud begins his tour in one of the modern  hotels near Gran Vía a Friday at 5  p.m. and  sees us out at the same time on next Sunday just off Puerta del Sol. In between, see his interesting agenda:

5 p.m. – With a metropolitan area population of more than six million, Madrid is a major city and could seem overwhelming for first-timers. Best to stay in the centre of the capital, where affordable hotels such as the Praktik Metropol (www.hotelpraktikmetropol.com/) abound. Airy, modern rooms can be found for $100 a night, sometimes even less, and the location steps off the Gran Via couldn’t be better suit to major sites.

5:30 p.m. – Like many Western economies, Spain is struggling. Show your local smarts and save the entry fee at the world famous Prado Museum (Calle Ruiz de Alarcón 23, www.museodelprado.es/en/) by lining up for the nightly free admission at 6 p.m. While you’ll only have two hours, research which galleries house the artists you most want to see. And as you’re in Spain, «local» artists such as El Greco, Goya and Velasquez might be among logical choices.

8:30 p.m. – It’s too early for dinner in Spain, where most restaurants don’t even open doors until 9. So go with tradition and sample the tapas and libations at Taberna de Antonio Sánchez (Calle de Mesón des Paredes 13), which specializes in local favourites.

10 p.m. – For dinner, head over to the lively Chueca district, with its trendy, funky shops, cafes and bars, driven by a youthful vibe and burgeoning gay scene.

At Bazaar (C/ Libertad, 21, here), you’ll find a sprawling, airy and stylish whitewashed room with huge glass windows looking out at the bustling street scene below. Arrive early to score a table on the upper level, and sample a host of moderately priced starters and entrees that navigate the terrain between pan-Asian and Spanish cuisines ranging from risottos to fresh fish.

Midnight: A stroll back to your hotel is entertainment enough, as the streets bustle with couples and groups heading off to tap into Madrid’s pulsing nightlife. This area also abounds with bars and intimate cafe if a nightcap is in order. 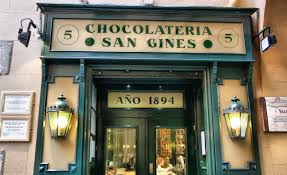 10 a.m. – One of the most touristy spots you can hit in Madrid — and one well worth the effort — is Chocolateria San Gines (Pasadizo de San Gines 11) where the thing to have from the very limited choices is churros, a kind of elongated, ridged donut, and a cup of hot chocolate, which to American palates is more akin to a cup of melted dark chocolate.

Dip the freshly fried churros into the thick sweet elixir and take in the wood-columned salon’s warm glow of this institution tucked away on a charming side street near the Plaza del Sol which dates to 1894. This filling, if hardly nutritious, breakfast will set you back less than $10.

11 a.m. – The Royal Palace (Calle Bailen, 34-914-548-800) is among the city’s top, and thus most-visited, sites, so best to get there early. Tours of the ornate, 2,000-room palace range in length up to several hours, and EU citizens get in free on Wednesdays, when you can see the changing of the guard. Self-guided tours are also allowed, and audio is available.

2 p.m. – In good weather, consider a splurge at the Ritz Madrid’s Terrace & Gardens cafe (Plaza Lealtad, 5, across the street from the Prado), which serves traditional Spanish cuisine including tapas amid bucolic plantings on shaded terraces.

If the city’s hot weather during the summer months proves too much, the recently refurbished Atocha train station is a short walk, where you can dine at any one of several casual lunch terraces in the dazzling main atrium, replete with towering tropical plantings and ponds under a glass roof.

4 p.m. – A lovely, and centrally located place to walk off lunch is the adjacent 20-acre Royal Botanic Garden (Plaza de Murillo, 2; here), which dates to the 18th century and boasts some 30,000 plants and flowers. Next door to the Prado Museum.

7 p.m. – After regrouping at your hotel, it’s time for tapas. But as in much of Spain tapas bars are ubiquitous, making it hard to choose a place on faith. Get the best of all possible worlds and also ogle some beautiful gastronomic treats at Mercado San Miguel (Plaza San Miguel), one of Madrid’s oldest marketplaces that has undergone a stunning renovation.

Grab a glass of tinto de la casa (house red) for a mere 3 euros, order up some nibbles such as mixed olives, Iberico ham, cheeses, smoked fish or even sweets from several of the dozens of purveyors and secure one of the tables that anchor the centre of the marketplace. You’ll find yourself among tourists from Japan, the U.S., Germany and Spain, as well as locals, all happily sharing this civilized, convivial Spanish tradition.

9 a.m. – Breakfast is not a «groaning board» affair in Spain, so do like the locals and nip into any of the hundreds of sidewalk cafes (weather permitting of course) for a light repast of coffee, juice, pastry and fresh fruit. Most hotels also provide a continental-type breakfast for guests as well. 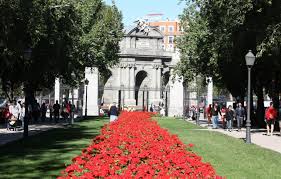 10 a.m. – A Sunday walk in the park – the sprawling, central Parque del Retiro – is in order. Enter at Plaza Independencia by the imposing, neo-Classical Puerta de Alcala, or gate, and stroll the manicured paths, past the man-made pond where couples and children boat, eventually making your way to the Victorian Crystal Palace where free art exhibits are usually on offer, and the sprawling rose garden.

Noon – Like many capital cities, Madrid is dense with museums of every stripe. A relatively intimate, self-guided experience can be had at the Cerralbo Museum (Ventura Rodriguez 17), the turn-of-the century home of the 17th Marquis of Cerralbo, an avid collector, academic, writer and archaeologist.

The 32-room museum has been meticulously preserved and restored, with its intact collection of objects, furniture, artwork and books which was considered Spain’s most complete and private collection of the time.

4 p.m. – Walk off that hearty midday meal with a stroll down the Gran Via. If shopping is your thing, you’ll find outlets of familiar stores such as H&M, as well as the stylish, well-known Spanish retailer Zara.

5 p.m. – Just off the Puerta del Sol, which marks the centre of Spain, you’ll find Mallorquina (8 Plaza del Sol), a bustling, bi-level long-established pastry shop offering a dazzling array of cream cakes and sweets. If weather permits, get your treats «to go» and head over to nearby Plaza Mayor.

This grand, 17th-century square is the first stop on most tourist itineraries, so why not make it your last? Take in the mimes and other street performers, and try to reconcile the vibrant, light-hearted scene with the spot’s bloody history as an execution centre during the Spanish Inquisition. (Editing by Paul Casciato)

Other cities in the series: