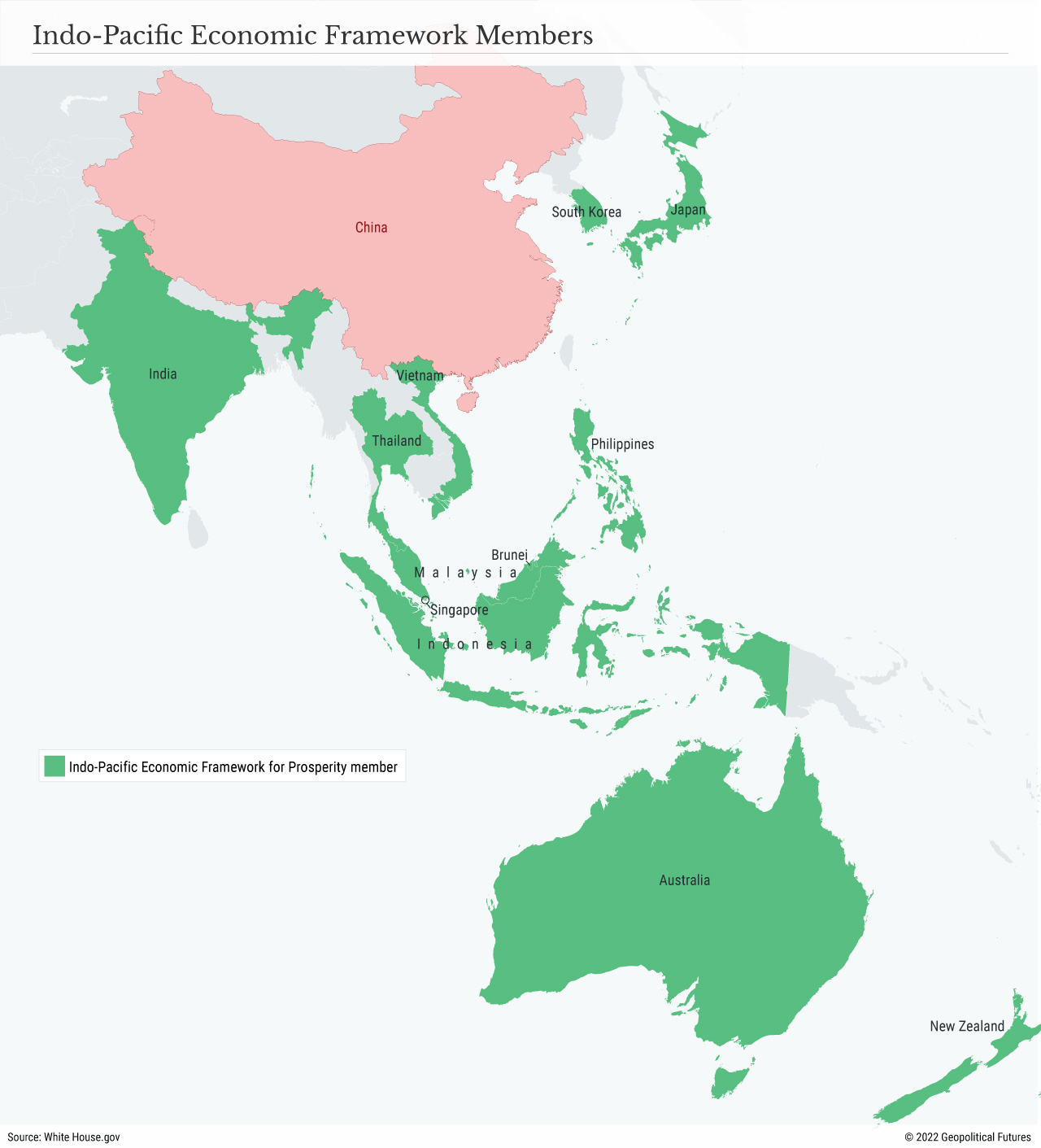 The United States recently said that it would defend Taiwan in the event China invades it. More interesting is that Japan, a country that hasn’t undertaken military action since 1945, said the same. This doesn’t change much militarily – American missiles would still savage China’s amphibious assault before it even reached Taiwan’s shores, hence why Beijing talks a lot about invasion without actually invading. But this changes the political environment dramatically.

Not least because of its economic implications. Washington and Tokyo not only boast two of the largest economies in the world but are major Chinese customers. The military warning is implicitly coupled with an economic one. This is compounded further by a declaration of what Washington is calling the Indo-Pacific Economic Framework, which will ostensibly include Japan, Australia, New Zealand, South Korea, India, Singapore, Malaysia, Indonesia, Vietnam, the Philippines, Thailand and Brunei. It is not clear what this group will do, or when it will do it. What’s clear is that there are a lot of Asian countries that are willing to participate in an economic grouping essentially sponsored by the United States, with Japan as its first member.

This is no small matter. China is in economic trouble, and President Xi Jinping is in trouble along with it. The Chinese economic miracle depended on exports to generate domestic capital. But for a variety of reasons, demand for its exports is shrinking, which has conspired with other issues to destabilize China’s financial system. India is eager to take China’s place as the world’s top exporter, and Malaysia, Indonesia, Vietnam the Philippines and Thailand would also like to take a piece of it. So if the framework grants any of them free or freer access to the American and Japanese markets, China will become less competitive.

And yet, the origin of China’s problem was political. The U.S. was its biggest customer (and still is but not as much) and that hurt a swath of social groups in the United States. Former President Donald Trump imposed tariffs on goods sold to the U.S., signaling a U.S. shift and shifting China’s internal psychology for unlimited exports to how to manage with potentially contracting exports. In the long run, this was a crisis of confidence that undermined the Chinese financial system, based as it was on real estate, which must be stabilized with the pain of economic restructuring. That in turn creates a political crisis that leads to either new rulers or more repression by the old ones.

There are now two guns pointing at China. One is military, which includes the Quadrilateral Security Dialogue of Japan, India, Australia and the United States. The other is economic, offering a serious challenge to China’s export strategy well before it is ready to shift to domestic consumption. Wars can solve economic problems as World War II did for the United States. The military coalition arrayed against China is unlikely to start a war, while Beijing would be facing a dangerous coalition if it started one itself. The two guns support each other.

This is occurring at the same time the Russo-Ukraine war rages. Russia chose to invade Ukraine with the assumption that Ukraine would crumble. It did not, primarily because of the massive infusions of weaponry sent to support Ukraine as well as an economic strike on Russia. China’s military threat is now facing an increasingly powerful military counter. China is also increasingly isolated. Months ago, it had formed an alliance of sorts with Russia. It was never clear how that alliance would benefit either nation, but now we’ll never know, thanks to Russia’s so far unsuccessful invasion of Ukraine. China can no longer afford to help Russia politically or economically, and Russia cannot afford to help China militarily.

The sum of all this is that the U.S. has reemerged as a global hegemon, even though it really never disappeared. The growth of Russia and China compelled the U.S. to achieve the position it had reached between 1945 and 1991, but that same growth has made Moscow and Beijing vulnerable. The U.S. is now engaged with Russia and China, and for what it’s worth, in Europe.

This is something I forecast in 2009. I said Russia would attack Ukraine, even if I was wrong about the timing of the invasion and how well Russia would fare in it. I also predicted that the war would lead to an internal crisis and that meanwhile an economic crisis in China would create a political crisis, leaving the U.S. as the de facto dominant power in the world.

Now that much of what I wrote has come to pass, I want to start focusing on my next set of 10-20 year forecasts: the emergence of Poland as a leading power in Europe, the reemergence of Japan as the dominant Asian power, and the rise of Turkey. This war is making Poland a significant military power and a decision-maker in Europe. Japan has now admitted that it is both a military and economic power, and as China weakens, it will be the decisive Asian power. My Turkey prediction looks bad, but I stand by it.