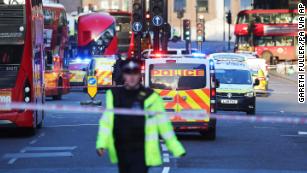 London (CNN)Bystanders took a stand against the London Bridge terror suspect Usman Khan, tackling him to the ground while wielding a fire extinguisher and an apparent narwhal tusk, as stories emerged of individual acts of bravery.