Taliban militants have captured all of Afghanistan’s big cities with the exception of Kabul, leaving the government isolated on Sunday as the US began evacuating personnel from its embassy amid fears that the Islamist fighters are poised to assault the capital.

The Taliban, who want to impose a strict interpretation of Islamic law, have swept across the country in just over a week, often meeting limited resistance as they took control of almost two-thirds of Afghanistan’s provinces in an astonishing reordering of the political map.

The northern city of Mazar-i-Sharif, a traditional stronghold of fierce anti-Taliban resistance, fell to the insurgent group late Saturday night after days of heavy fighting. Influential political figures in the region fled, including anti-Taliban leaders Abdul Rashid Dostum and Ata Mohammad Noor, who sought refuge in neighbouring Uzbekistan, according to local news reports.

“Kabul is now effectively surrounded — all major roads to Kabul are closed,” Bill Roggio, editor of the Long War Journal wrote on Twitter on Sunday after the Taliban entered Jalalabad, about 150km east of the capital. “The only thing that can slow the collapse of Kabul is the US mission to evacuate the embassy. Only for a time.”

The week-long lightning offensive has left President Ashraf Ghani’s government politically and militarily isolated, and raised fears of an imminent Taliban takeover of the capital as the US affirmed its plan to withdraw all its troops by the end of the month. The Taliban continued its push into the few pockets of government-held territory, with the central province of Daykundi surrendering on Sunday with few shots fired, according to media reports. 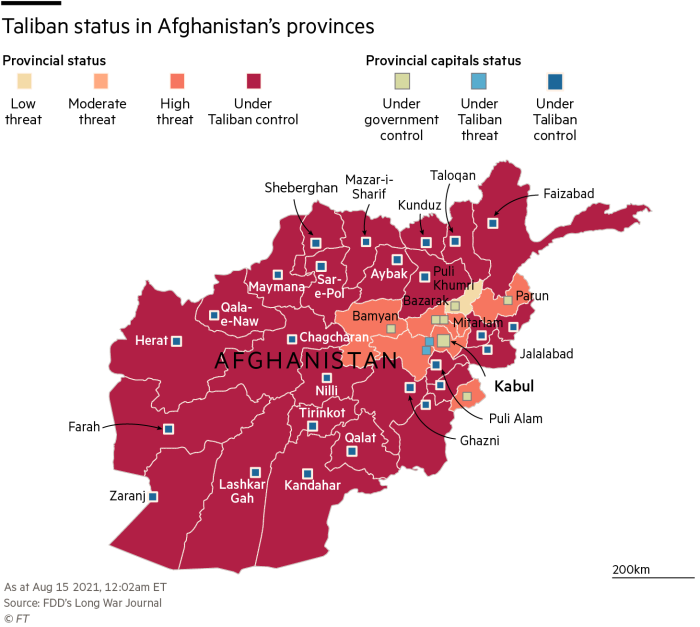 President Joe Biden late on Saturday announced that Washington would increase its deployment of troops to Afghanistan to 5,000 to support the evacuation of diplomats from the American embassy as well as other allied personnel and thousands of Afghans at high risk of Taliban retribution for working with the US.

In a statement, Biden said Washington had warned the Taliban that “any action on their part on the ground in Afghanistan, that puts US personnel or our mission at risk there, will be met with a swift and strong military response”.

He also said that the US would work with Ghani and other Afghan political leaders, as well as regional powers, “as they seek to prevent further bloodshed and pursue a political settlement”.

However, experts warned that Afghanistan, with a diverse mix of rival ethnic groups and fierce community rivalries, was headed towards a civil war and was likely to see fighting continue to rage.

“This is the end of Afghanistan as a nation,” Sara Wahedi, a former Afghan government official who runs a security app for Kabul residents, wrote on Twitter. “No one will be able to lead the entire country . . . We are back to 1992.”

The rapid disintegration of the Afghan National Army has stunned many in Washington who had expected the US-trained force to be able to put up a stronger resistance to the onslaught from the Islamic insurgents.