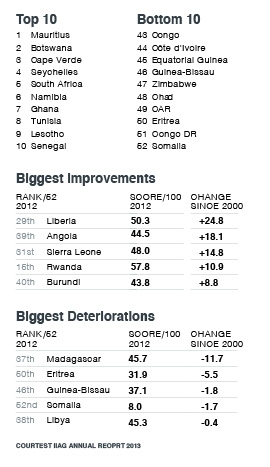 The Ibrahim Index of African Governance ranking countries according to their performance released on October 14, 2013 (Source: AJEnglish) The Mo Ibrahim Prize for Achievement in African Leadership is the world’s most generous prizes. It is also proving to be one of its most elusive, after the prize committee announced on Monday that there was no African leader who met the criteria for the 2013 award.

2013 is the second year in a row that no suitable candidate has been found. Since its inception in 2007, the prize has only been awarded three times.

Al Jazeera’s Yasmine Ryan spoke with Dr Ibrahim about why the foundation is finding it so hard to find awardees, the relationship between rising inequality and worsening rule of law, and the controversy surrounding the International Criminal Court’s (ICC) focus on African leaders.

Al Jazeera: Were there any leaders who might have qualified who were under consideration for the Mo Ibrahim Prize this year?

Mo Ibrahim: Yes of course, I’m not a member of the prize committee, but according to the rules, the committee looks at the people that left office in the last three years, peacefully. It is up to the prize committee to decide whether people meet the standard. We set a very high standard, of course. And we are proud of our prize committee for being credible and tough. It’s a prize for excellence, it’s not a pension… MORE