Why America tried to kill all the mosquitoes in Panama 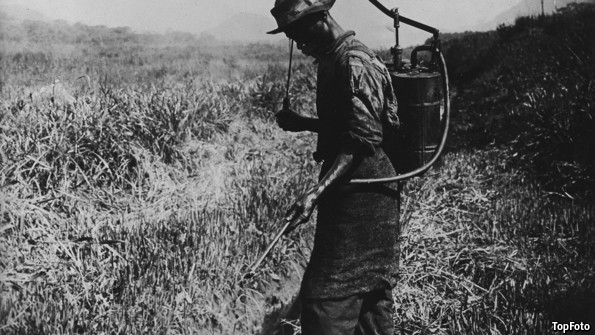 OVER the course of human history malaria has been one of the deadliest tropical diseases that man has encountered. In spite of several efforts to wipe it out, malaria is still all too common in many parts of the developing world. The World Health Organisation estimates that 207m people contracted malaria in 2012, with around 800,000 succumbing to it. The economic toll is significant too: one study suggests that malaria reduces Africa’s GDP by around $12 billion (around 0.8%) each year owing to lower labour productivity and reduced tourism. Malaria is present in some parts of Latin America. But thanks to the US Army, in and around the Panama Canal Zone the risk of catching the disease is low. Why?

In 1904 the US Army was tasked with helping construct a canal to connect the Caribbean Sea to the Pacific Ocean, to speed up the shipping of goods between the east and west coasts of the United States. America was not the first country to attempt the feat. As early as the 1840s the British thought about digging a canal across the Isthmus of Panama, but were deterred by the hostility of the politics and geography. In 1881 the French, buoyed by the successful construction of the Suez Canal in Egypt, decided to take on the project. But they did not account for the deadly mosquitoes: 22,000 of the project’s workers died after contracting malaria and yellow fever. The loss of life caused construction costs to spiral, leading to the bankruptcy of the canal’s owners in 1889 after they had spent $287m on the project ($7 billion at today’s prices). The canal lay abandoned and incomplete.

The American government bought the land in 1904 and quickly realised that it needed to protect its workforce from the diseases that had scuppered the French. To do so, it tried to kill as many of the disease-carrying mosquitoes in Panama as possible. Thousands of American troops were sent in with orders to destroy every habitat that could harbour the mosquitoes. Swamps were drained. Pools and lakes of still water were tainted with oil or simply blown up with explosives. Buildings in the area were fumigated and high-risk areas were doused with insecticide (see picture). The scale of the operation was huge: around 700,000 gallons of oil and 124,000 gallons of insecticide were used during the construction of the canal each year. And it was success, at least in relative terms. The death toll among the workforce was 5,000 by the time the canal opened in 1914, less than a quarter of the number who had died working on the unsuccessful French project.

But the environmental cost was huge: the insecticide and oil-polluted watercourses killed other animals too. Nor was it cheap. Each mosquito reportedly cost around $10 to kill—$240 in today’s prices. Such heavy-handed tactics today would be unaffordable in the parts of the world where malaria remains a problem, particularly in rural areas where sparse populations make intervention expensive. What’s more, new breeds of insecticide-resistant mosquitoes might make this strategy futile. Some development experts are pinning their hopes on a new vaccine that is being developed as a cheaper way to reduce deaths from malaria. That would be a more subtle approach than sending in the US Army.

Dig deeper:
It was a good investment for America. Now China has its eye on the Panama Canal (August 2014)
How to get mosquitoes to breed themselves to death (June 2014)
A new vaccine is one step towards a distant goal (October 2011)