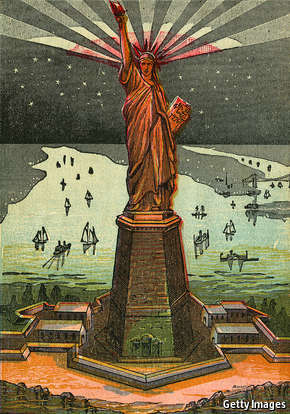 The Cause of All Nations: An International History of the American Civil War. By Don Doyle. Basic Books; 382 pages; $29.99. Buy from Amazon.com

HISTORIANS of the American civil war find themselves in the same unenviable position as Shakespeare scholars: so thoroughly have their fields of study been tilled that finding a nearly virgin corner is all but impossible. But Don Doyle, a professor at the University of South Carolina, has broken new ground in an enlightening and compellingly written book, “The Cause of All Nations”. More than any previous study, it tells the story of how America’s civil war was perceived, debated and reacted to abroad, and how that reaction shaped the course of the war at home.

Mr Doyle reminds readers that the war began just 13 years after the European uprisings of 1848. It looked as though America’s then 80-year experiment with self-government was nearing a violent end; European royalists and aristocrats reacted with glee, republicans with despair.

Both the Union and the Confederacy eagerly sought foreign support and funding. In retrospect it seems clear how the sides should have aligned: the abolitionist Union should have found a natural partner among republicans, who were pushing for greater popular sovereignty in Europe, whereas the Confederacy, with its pseudo-aristocracy resting on the profits of forced labour, should have appealed to Europe’s reactionary forces.

At the war’s outset, however, things were not so simple. Confederate diplomats framed their struggle in accordance with liberal principles of self-determination. They judged the conflict, Mr Doyle notes, to be “one arising naturally between industrial and agrarian societies, not freedom and slavery.” The North’s response, meanwhile, was flat-footed, legalistic and intemperate. America’s secretary of state threatened to “wrap the whole world in flames”, promising total war on any state that dared aid the Confederacy. For domestic reasons, Abraham Lincoln, then America’s president, was unwilling to cite slavery as the war’s principal point of disputation.

European observers showed no such hesitancy, nor did the Confederacy. (Alexander Stephens, the Confederate vice-president, said that its cornerstone “rests upon the great truth that the negro is not equal to the white man; that slavery, subordination to the superior race, is his natural and moral condition.”) Giuseppe Garibaldi, a hero of the 1848 uprisings, was set to amass an army to fight for the North. He demurred largely because the Union was unwilling to declare emancipation as the war’s goal. Carl Schurz, ambassador to Spain, urged Union officials in Washington to “place the war against the rebellious slave States upon a higher moral basis and thereby give us the control of public opinion in Europe.”

Schurz comes off as one of the most perspicacious characters in Mr Doyle’s book, but that is rather like being the tallest midget in the circus. Once the Union at last firmly identified with the ending of slavery, public opinion in Europe moved slowly but inexorably in its favour, though that shift owed more to existing anti-slavery sentiment in Europe than to any particular skill among Union diplomats. Their Confederate counterparts were even less competent; whatever brief successes they enjoyed owed more to European rulers’ desire to see America fail for strategic reasons than to any sympathy with the Southern cause. (Napoleon III wanted to expand France’s overseas influence and saw a united America as a military impediment and the Confederacy as a potential ally, whereas Britain’s prime minister, Lord Palmerston, feared the spread and appeal of republican democracy and saw a united America as a political threat.)

Most histories of the civil war turn inward at the end and examine the war’s consequences and legacy for America. Mr Doyle turns outward to show how important America’s civil war was to the rest of the world: liberty and democracy defeated slavery and the landed gentry.

The Union’s victory had wider repercussions. In Spain, Queen Isabella, fearing American naval power, ended the attempted recolonisation of Santo Domingo; three years later she was overthrown. Ulysses Grant, a civil-war general, turned his military attention south, to Mexico, where Napoleon III had installed an Austrian, Maximilian, as emperor. When the threat of an alliance between France and the Confederacy was dashed, Napoleon withdrew his support and in 1867 Maximilian was executed by Mexican troops. Across the ocean, Britain’s republicans marched to victory that same year, forcing the passage of the Reform Act, while Napoleon III lasted just four more years, until the Paris Commune seized France’s capital. Democracy had not just survived, but flourished.

After Lincoln’s death Avenir National, a French newspaper, wrote that he “represented the cause of democracy in the largest and the most universal understanding of the word. That cause is our cause, as much as it is that of the United States.” To commemorate the Union’s victory a French artist crafted a statue out of copper sheeting, a figure representing freedom, tall and proud, holding a torch aloft. The Statue of Liberty stands today in New York harbour, the copper now green with age, her gaze fixed across the Atlantic on Europe.

Correction: The original version fo this review referred to Spain withdrawing from its Latin American colonies in 1865. In fact Spain had been kicked out of all but Cuba and Puerto Rico 40 years earlier; it withdrew from an attempted recolonisation of Santo Domingo (now the Dominican Republic). Sorry for the error. This was corrected on January 28th 2015.