The belief that everything is getting worse paints a distorted picture of what we can do, and makes us more fearful. But while getting the facts wrong – or willfully misrepresenting them – often results in misguided policies, fact-based recognition of what humanity has achieved encourages policies that can achieve the most good.

It’s very easy to form the view that the modern world is coming apart. We are constantly confronted with an onslaught of negativity: frightening headlines, alarming research findings, and miserable statistics.

There are indeed many things on the planet that we should be greatly concerned about. But fixating on horror stories means that we miss the bigger picture.

The United Nations focuses on three categories of development: social, economic, and environmental. In each category, looking back over the last quarter-century, we have far more reason for cheer than fear. Indeed, this period has been one of extraordinary progress.

A pessimist might suggest this means we have 7.5 more years to be sick and miserable, but this is not the case. In 1990, we spent almost 13% of our life unwell, and that percentage has not increased. And while there is much talk of inequality being worse than ever, on this most vital measure, inequality is decreasing: the gap between life expectancy in poor and rich countries has narrowed dramatically.

In terms of economic development, one of the most important indicators is the share of people in poverty. Far fewer people now live in abject need. In 1990, 37% of all people were living in extreme poverty; today it’s less than one in ten. In just 28 years, over 1.25 billion people have been lifted out of poverty – a miracle that receives far too little attention.

Looking at the environment, one of the biggest killers is indoor air pollution caused by poor people using dung and wood to cook and keep warm. In 1990, this caused more than 8% of deaths; now it’s 4.7%. That equates to more than 1.2 million fewer people dying from indoor air pollution each year, despite an increase in population.

The improvements do not stop there: the world is more literate; child labor has been dropping; we are living in one of the most peaceful times in history; and the majority of the world’s governments are democratic regimes.

Max Roser of Oxford University has built a comprehensive website to explore data like these. He strikingly suggests that we could think about these quarter-century changes in terms of what happened over the past 24 hours: seen this way, just in the last day, average life expectancy increased by 9.5 hours; 137,000 people escaped extreme poverty; and 305,000 got access to safer drinking water. The media could have told each of these stories every single day since 1990.

But good news is not as newsworthy as bad news. That is not just the media’s fault. It’s more challenging to tell a positive story. In many cases, the “news” isn’t that something has happened, but that a bad thing is no longer happening. It doesn’t capture our imagination in the same way. An intriguing 2014 study found that even when participants stated that they wanted to read positive stories, their behavior revealed a preference for negative content (a preference they didn’t even realize).

We should all challenge ourselves to pay more attention to the positive facts. When people are asked if living conditions around the world will be better in 15 years, 35% believe they will be, and 29% think they will get worse – essentially a toss-up. But among people who understand that many things on the planet already are better than they were, 62% believe in progress. That share drops to just 17% among those who don’t know the facts. The belief that everything is getting worse paints a distorted picture of what we can do, and makes us more fearful.

Consider the fairly common scenario in which politicians and the media whip up fear of crime, even when statistics show national crime rates are low or falling. Attention and scarce resources can end up being devoted to solving the wrong challenge, and we get more police on the streets or reduced civil liberties, rather than more welfare-enhancing – but less newsy – policies like improving pre-schools or health care.

While getting the facts wrong can easily result in misguided, fear-based policies, a more balanced, fact-based recognition of what humanity has achieved enables us to focus our efforts on the areas where we can achieve the most good (often where we are already doing well). This will ensure that the future can be even brighter.

Bjørn Lomborg, a visiting professor at the Copenhagen Business School, is Director of the Copenhagen Consensus Center, which seeks to study environmental problems and solutions using the best available analytical methods. He is the author of The Skeptical Environmentalist, Cool It, How to Spend $75 Billion to Make the World a Better Place and The Nobel Laureates’ Guide to the Smartest Targets for the World, and was named one of Time magazine’s 100 most influential people in 2004.

Bjorn Lomborg@BjornLomborg
New study: climate makes children born today experience 2-36x more climate catastrophes Lot of media coverage But study assumes everyone stays poor and do nothing to adapt Not remotely true of real world So, what’s the point, except to scare? https://science.org/doi/10.1126/science.abi7339…

To predict 2100, scary climate study assumes nobody does anything after 2005 – how does that inform real-life decisions? They don’t even tell you this in main study – you have to read the supplementary material, almost as if they don’t want you to know https://science.org/doi/10.1126/science.abi7339…

Predicting the world in 2021 with 1926 data is awful. Since 1926, sea levels risen 15-20cm so prediction: drowned significant parts of the world But human ingenuity actually means that *more* land has been reclaimed than lost! https://nature.com/articles/nclimate3111…

Scary climate study cherry-picks events that they know will get worse Not useful way to guide policy but great way to scare (they also introduce ref37, which describes all their data better https://agupubs.onlinelibrary.wiley.com/doi/10.1029/2020EF001616…)

But, of course, if you ignore societies controlling fire… Not useful to guide policy but great way to scare https://science.org/doi/10.1126/science.abi7339 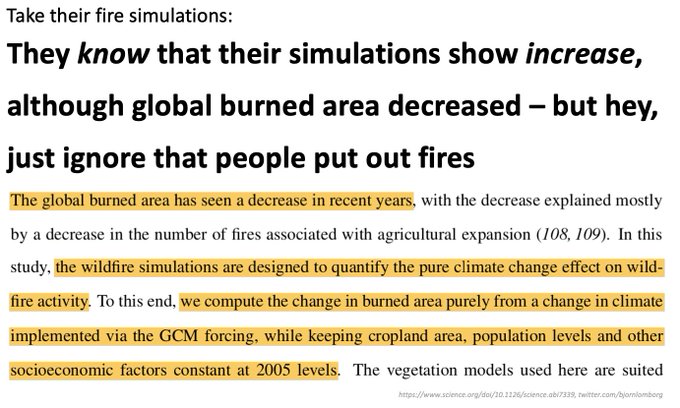 Scary climate study uses fire model that doesn’t really work And acknowledges that human action could reverse ”any of the trends found here” But while this is useless to guide policy it is great for scaring https://agupubs.onlinelibrary.wiley.com/doi/10.1029/2020EF001616