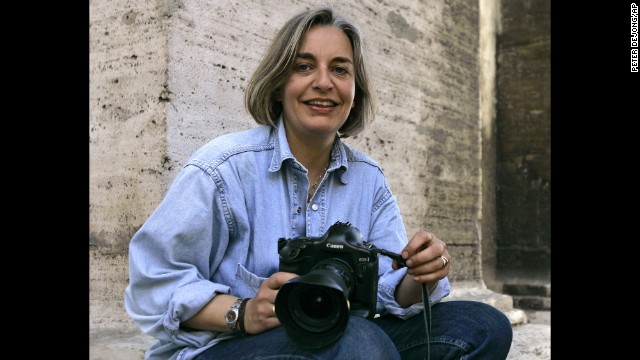 From the lens of Anja Niedringhaus (CNN)

Associated Press photographer Anja Niedringhaus, an internationally acclaimed, Pulitzer Prize-winning German photographer, was fatally shot in Afghanistan, the AP said Friday, April 4. She was 48. Click through the gallery to see some of her photos from over the years. (CNN )

Kabul, Afghanistan (CNN) — An Associated Press photographer was shot to death on the eve of Afghanistan’s elections in an attack that wounded the news agency’s long-time reporter in the region.

The attack injured Kathy Gannon, a Canadian reporter based in Islamabad, who was in stable condition and getting medical treatment, according to the AP. Gannon, 60, has reported on Pakistan and Afghanistan since the 1980s.

«Anja and Kathy together have spent years in Afghanistan covering the conflict and the people there,» said AP executive editor Kathleen Carroll, speaking in New York. «Anja was a vibrant, dynamic journalist well-loved for her insightful photographs, her warm heart and joy for life. We are heartbroken at her loss.»

In a letter to AP staff Friday morning, chief executive Gary Pruitt also praised the courage and skill of Niedringhaus, describing her as «spirited, intrepid and fearless, with a raucous laugh that we will always remember.»

Covering Afghan Vote, Until Shot by an Ally The New York Times -By MATTHEW ROSENBERG and FAROOQ JAN MANGAL APRIL 4, 2014

The 20 photographs of the week  The Guardian Jim Powell theguardian.com, Saturday 5 April 2014 13.54 BST

In this week’s gallery of the best photojournalism from the week, we pay tribute to regular contributor Anja Niedringhaus. The Pulitzer Prize-winning photographer was killed this week covering the presidential election in Afghanistan. She worked in the conflict areas of the Middle East, Afghanistan, Pakistan and Libya from where she always displayed compassionate and courageous photojournalism.