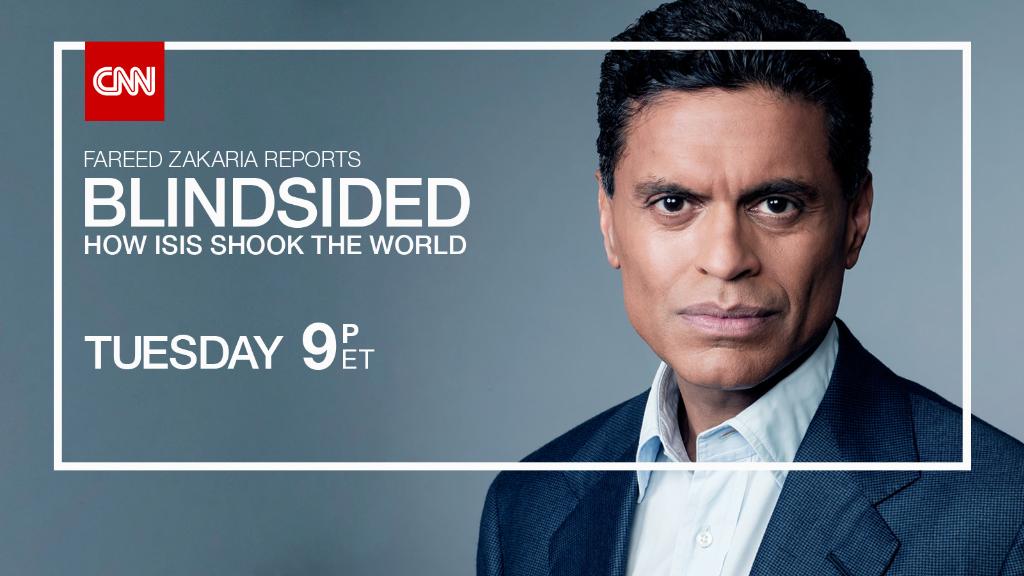 How they started, what they want. #Blindsided: How #ISIS Shook the World airs tonight http://cnn.it/1Qtmfdx #FZGPS

Blindsided: How ISIS Shook the World.

THIS IS A RUSH TRANSCRIPT. THIS COPY MAY NOT BE IN ITS FINAL FORM AND MAY BE UPDATED.

UNIDENTIFIED MALE: Horrified screams coming from inside the theater.

ZAKARIA: Each time we meet the face of evil, we ask how? Why? Young men, boys, turned into butchers, maiming and murdering hundreds of innocents, striking at the heart of one of the world’s great cities, blowing a plane out of the sky, entire families turned to dust. All of it done with a reach and precision we have not imagined ISIS’ capable of.

As the world cries out for vengeance, perhaps the most important question is this, how could we not have known?

The answer is, we did. This is the story of what we knew about ISIS and when we knew it. It is a story that has not been told before, not in its entirety, told by the people who have made the journey into the mind and heart of ISIS.

We begin with an extraordinary chance to look into the Islamic State. Not a single reporter has dared to venture there since the gruesome beheadings of journalists began last year. Imagine seeing this.

JOHN CANTLEY: I’m John Cantley, being British citizen abandoned by my own government.

UNIDENTIFIED MALE: These could be my last hours in this world.

ZAKARIA: And then heading straight into the heart of darkness.

But that is precisely what this man did.

JURGEN TODENHOFER, GERMAN JOURNALIST: During the months I was preparing the trip, every night, I felt a knife on my throat. I felt it physically.

ZAKARIA: Jurgen Todenhofer is a German journalist. Last year, he crossed the border into ISIS territory.

TODENHOFER: I think you must know your enemy if you want to defeat it. ZAKARIA: He went to Mosul, an Iraqi City about the size of Philadelphia, population around 1.5 million. It’s the biggest prize ISIS has captured. This extraordinary video gives us a rare look into everyday life under ISIS.

It brings to mind the writer Hannah Arendt concept, the banality of evil. ISIS has its own license plates and traffic cops who give parking tickets. And there are friendly shopkeepers.

TODENHOFER: Completely brainwashed. I’ve never in my life met people like this.

ZAKARIA: This of course is the Mosul ISIS officials wanted Todenhofer to see. They gave him written permission to come to the city, and he believes they let him leave alive to make a point.

TODENHOFER: They wanted to show me that they are a State and that this State is working.

ZAKARIA: And it’s getting bigger. Todenhofer saw new recruits pouring in every day.

TODENHOFER: In this recruitment center, we had every day more than 50 new fighters.

They can lose fighters. They don’t care. The amazing thing is that they are completely enthusiastic. They think it’s the time of their life. They think that they are part of a historical event, changing the whole Middle East.

ZAKARIA: Among them were Americans.

ZAKARIA: There were also American weapons. Soldiers carry them like a badge of honor, even the children.

UNIDENTIFIED MALE: How old you are?