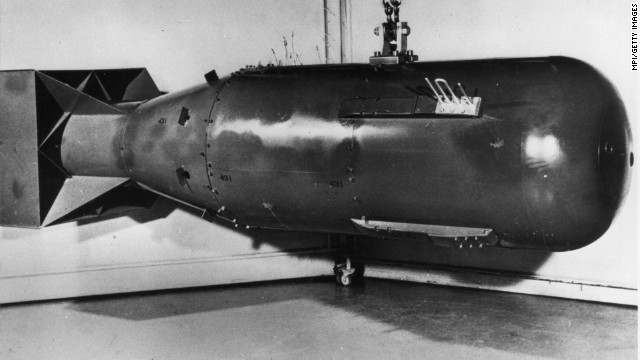 An atomic bomb of the ‘Little Boy’ type, which was detonated over Hiroshima, Japan 68 years ago.(CNN. August 6, 2013)

(CNN) — The decision by the United States to use the atomic bomb against Japan in August 1945 is credited with ending World War II. Here is some background information about the history of the atomic bomb, by the numbers:

80,000 – People who died instantly in Hiroshima, Japan, on August 6, 1945, when the first ever atomic bomb was used in war. The code name of the uranium-based bomb was «Little Boy.»

192,020 – Total number of those killed in Hiroshima, combining those killed instantly and those killed from radiation and other aftermath. The revised total was released at a ceremony on the 50th anniversary of the bombing.

3 – Number of days between the first and second atomic bombs dropped on Japan. On August 9, 1945, «an implosion-model plutonium bomb code-named «Fat Man,» was detonated over Nagasaki… read more

Have 70 years of nuclear policy been based on a lie?

(Foreign Policy) The U.S. use of nuclear weapons against Japan during World War II has long been a subject of emotional debate. Initially, few questioned President Truman’s decision to drop two atomic bombs, on Hiroshima and Nagasaki. But, in 1965, historian Gar Alperovitz argued that, although the bombs did force an immediate end to the war, Japan’s leaders had wanted to surrender anyway and likely would have done so before the American invasion planned for November 1. Their use was, therefore, unneTrumancessary. Obviously, if the bombings weren’t necessary to win the war, then bombing Hiroshima and Nagasaki was wrong. In the 48 years since, many others have joined the fray: some echoing Alperovitz and denouncing the bombings, others rejoining hotly that the bombings were moral, necessary, and life-saving.

Both schools of thought, however, assume that the bombing of Hiroshima and Nagasaki with new, more powerful weapons did coerce Japan into surrendering on August 9. They fail to question the utility of the bombing in the first place — to ask, in essence, did it work? The orthodox view is that, yes, of course, it worked. The United States bombed Hiroshima on August 6 and Nagasaki on August 9, when the Japanese finally succumbed to the threat of further nuclear bombardment and surrendered. The support for this narrative runs deep. But there are three major problems with it, and, taken together, they significantly undermine the traditional interpretation of the Japanese surrender.

The first problem with the traditional interpretation is timing. And it is a serious problem. The traditional interpretation has a simple timeline: The U.S. Army Air Force bombs Hiroshima with a nuclear weapon on August 6, three days later they bomb Nagasaki with another, and on the next day the Japanese signal their intention to surrender.* One can hardly blame American newspapers for running headlines like: «Peace in the Pacific: Our Bomb Did It!»… read more