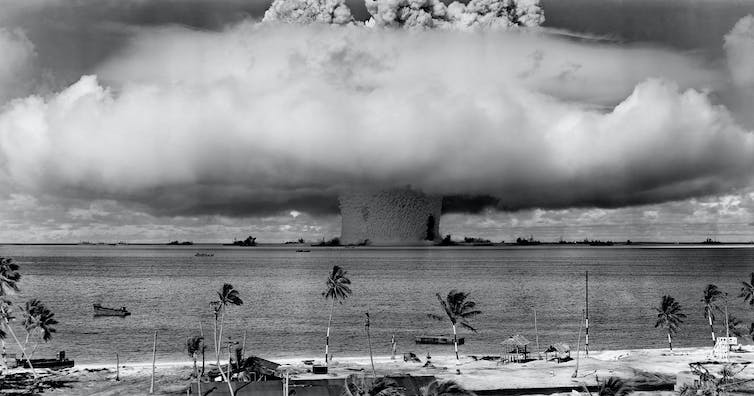 The ‘Baker’ Explosion, part of Operation Crossroads, a US Army nuclear test at Bikini Atoll, Micronesia, on July 25, 1946. Wikimedia Commons

There’s little that the left and the right agree on these days. But surely one thing is beyond question: that national governments must protect citizens from the gravest threats and risks they face. Although our government, wherever we are in the world, may not be able to save everyone from a pandemic or protect people and infrastructure from a devastating cyberattack, surely they have thought through these risks in advance and have well-funded, adequately practiced plans?

Unfortunately, the answer to this question is an emphatic no.

Not all policy areas are subject to this challenge. National defence establishments, for example, often have the frameworks and processes that facilitate policy decisions for extreme risks. But more often than not, and on more issues than not, governments fail to imagine how worst-case scenarios can come about – much less plan for them. Governments have never been able to divert significant attention from the here and happening to the future and uncertain.

A recent report published by Cambridge University’s Centre for the Study of Existential Risk argues that this needs to change. If even only one catastrophic risk manifests – whether through nature, accident or intention – it would harm human security, prosperity and potential on a scale never before seen in human history. There are concrete steps governments can take to address this, but they are currently being neglected.

The risks that we face today are many and varied. They include:

Each of these global catastrophic risks could cause unprecedented harm. A pandemic, for example, could speed around our hyper-connected world, threatening hundreds of millions – potentially billions – of people. In this globalised world of just-in-time delivery and global supply chains, we are more vulnerable to disruption than ever before. And the secondary effects of instability, mass migration and unrest may be comparably destructive. If any of these events occurred, we would pass on a diminished, fearful and wounded world to our descendants.

So how did we come to be so woefully unprepared, and what, if anything, can our governments do to make us safer?

Dealing with catastrophic risks on a global scale is a particularly modern problem. The risks themselves are a result of modern trends in population, information, politics, warfare, technology, climate and environmental damage.

These risks are a problem for governments that are set up around traditional threats. Defence forces were built to protect from external menaces, mostly foreign invading forces. Domestic security agencies became increasingly significant in the 20th century, as threats to sovereignty and security – such as organised crime, domestic terrorism, extreme political ideologies and sophisticated espionage – increasingly came from inside national borders.

Unfortunately, these traditional threats are no longer the greatest concern today. Risks arising from the domains of technology, environment, biology and warfare don’t fall neatly into government’s view of the world. Instead, they are varied, global, complex and catastrophic.