Berlin, 9 July 2013 – More than one person in two thinks corruption has worsened in the last two years, according to the world’s largest public opinion survey on corruption from Transparency International, but survey participants also firmly believe they can make a difference and have the will to take action against graft.

The Global Corruption Barometer 2013 is a survey of 114,000 people in 107 countries and it shows corruption is widespread. 27 per cent of respondents have paid a bribe when accessing public services and institutions in the last 12 months, revealing no improvement from previous surveys.

Still, nearly 9 out of 10 people surveyed said they would act against corruption and two-thirds of those who were asked to pay a bribe had refused, suggesting that governments, civil society and the business sector need to do more to engage people in thwarting corruption.

“Bribe paying levels remain very high worldwide, but people believe they have the power to stop corruption and the number of those willing to combat the abuse of power, secret dealings and bribery is significant, “ said Huguette Labelle, the Chair of Transparency International… MORE  (Download the report in English)

What is the Corruption Perceptions Index? 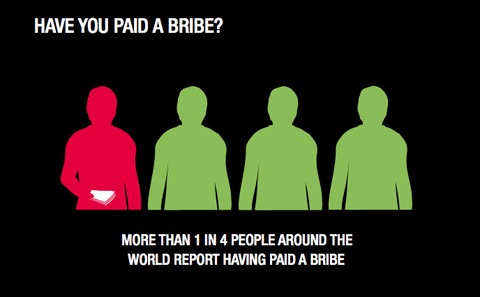 Ever Paid a Bribe? New Report Says You’re Not Alone

A new report finds that more than one in four people in the world have payed a bribe in the last year. Image from the report «Global Corruption Barometer»

One out of four people have paid a bribe in the last twelve months. This is according to Transparency International’s 2013 Corruption Barometer, a worldwide survey of 114,000 people cataloging their direct experiences with corruption. The report’s findings are bleak if you’re in the pro civil society camp. Almost a third of all world citizens interviewed reported experiencing corruption when they dealt with their local police — 24 percent reported bribery going on at their local judiciary. Political parties are seen as the most corrupt institutions in just about every country. Perhaps not the best news for democracy. 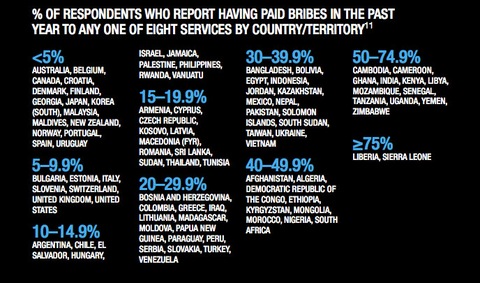 This report led to an interesting discussion here at NewsHour HQ. Have any of us ever paid a bribe? Perhaps we slipped money to an officer to get out of a traffic ticket in Mexico? Is it bribery if you drop a $20 bill to get into a night club? Have you ever paid a bribe? Fill out our questionnaire below (all answers in the poll are anonymous) and tell us the stories of your personal experiences with bribery in the comments…

Government and politics
The Spanish legislative branch lacks efficient democratic processes due to the strong influence of political party leaders within parties. High-ranking party leaders decide if MPs are to remain on the party’s lists, not the constituents. MPs therefore have more incentive to be loyal to their party leaders than to their constituency – limiting MPs’ independent vote and deterring whistleblowing. Closed and blocked voting lists also favour a system in which the party leaders maintain strong control over the representative bodies on the national, regional and local level.

Executive accountability is also limited. The Spanish Court of Audit is the only supreme body responsible for auditing government accounts and financial management. It also regulates the financing of political parties and the electoral processes. Although the agency is legally independent, in practice it is influenced by the two major political parties. The institution has sufficient resources, but is not very effective in controlling the efficiency and effectiveness of the public sector… MORE