This year’s index ranks 168 countries/territories by their perceived levels of public sector corruption. The index draws on 12 surveys covering expert assessments and views of businesspeople. The Corruption Perceptions Index is the leading global indicator of public sector corruption, offering a yearly snapshot of the relative degree of corruption by ranking countries from all over the globe. For more information click here: www.transparency.org/cpi.

available online as of 4.00 GMT

These are the 10 most corrupt countries in the world: http://trib.al/F0Rv3qg

10 Most Corrupt Countries, Ranked By Perception

‘When you fight corruption, it fights back.’

Corruption lingers at the core of many of the world’s underdeveloped nations.

Nigeria, the most populated country in Africa, is perceived to be the most corrupt among 60 countries evaluated, according to data from the 2016 Best Countries rankings. The rankings are a characterization of 60 countries based on a survey of more than 16,000 people from four regions.

In the survey, respondents answered how closely they related each of the 60 countries to the term «corrupt.» Respondents were given no further specifications of the term, so interpretation of the word «corrupt» was left to survey respondents.

Elections in Nigeria face scrutiny, even though government accountability is seen as having improved. In 2015, President Maj. Gen. Muhammadu Buhari became the first opposition party candidate to win an election. As part of his presidential campaign, Buhari promised to crack down on corruption.

«When you fight corruption, it fights back,» Nuhu Ribadu, the former chairman of Nigeria’s Economic and Financial Crimes Commission, said in a TedX talk in Berlin.

Nigeria’s former national security adviser, Sambo Dasuki, is scheduled to face trial on charges of fraud and money laundering, according to Bloomberg. It is the country’s first high-profile corruption trial since Buhari took office.

In November, Nigerian President Muhammadu Buhari attributed this incident – and otheralleged abuses of power – to the country’s inability to defend itself from other threats, including Boko Haram, an extremist group that began its conquest in 2009 to create an Islamic state.

Meanwhile, on the other side of the world, Colombia – a country synonymous with illegal drug kingpins like Pablo Escobar – gives Nigeria a run for its money as the second most corrupt country, based on perception.

Below are the 10 countries perceived to be the most corrupt, according to data from the 2016 Best Countries rankings. 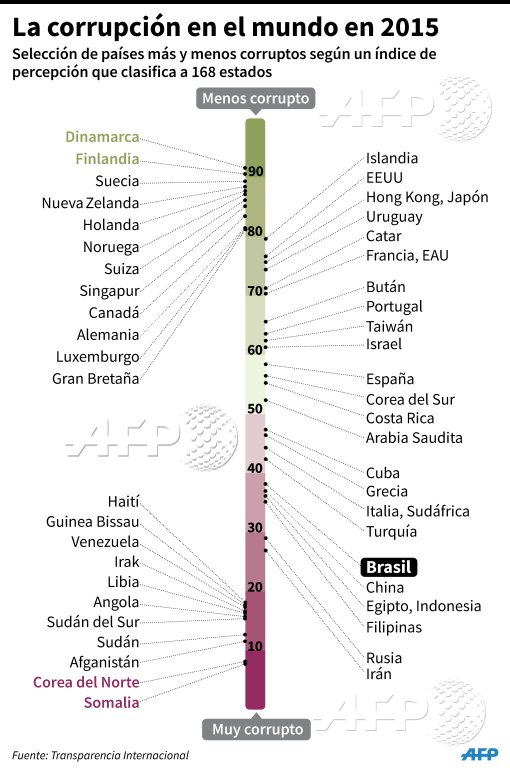