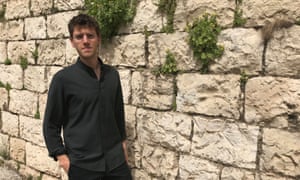 I had pretzels and a beer ready to pop. It was after 10pm and I was watching a live feed of mission control. An Israeli-built spacecraft was approaching the lunar surface and due to touch down within minutes. It was a straightforward good news story – the first privately funded attempt to land on the moon.

Flight engineers had their eyes glued to screens and I was listening to one talking through the details in Hebrew. Then, amid the technical jargon, I heard a jolting phrase in English: “Not OK”.

Crap, I thought. Can’t one sleep-deprived reporter get a break?

I had just covered a gruelling election that everyone seemed to agree was bitterly divisive, regardless of whom they supported. Benjamin Netanyahu won a fifth term with help from far-right allies despite three looming corruption indictments he dismissed as a “witch-hunt”. His election campaign was also condemned for anti-Arab scaremongering.

This moon lander, instead, was the advancement of science – beautifully untouched by the poison of politics and conflict – and I wanted to report its success.

I had arrived in Jerusalem a year earlier, taking on one of journalism’s most toxic beats: Israel-Palestine. Covering this place is so contentious that there is a whole book on the Guardian’s history with Israel. Unlike anywhere I’ve ever reported, the focus here is not on what happens, but how that story is told, dragging us journalists into the fight over the narrative.

I was deported from Yemen and shot at in Syria, yet I have never experienced such a determined, day-to-day attempt to influence the independence of our work as I do here.

This is done with online attacks and relentless complaints, and also with smiles. Lobbyists offer to “help” by setting up interviews or trips, but only those that promote their cause. These groups don’t understand how our goals are completely at odds. If they succeed, to make press coverage of Israel glowing, while playing down the country’s failings, then we neglect our goal, which is, of course, to report fairly and objectively.

Last month I was reporting on the Israel-Gaza frontier, where Israeli soldiers have shot more than 7,000 Palestinians, killing close to 200, participating in a year-long protest movement. A UN inquiry found they had intentionally fired on children, medics and journalists, possibly committing war crimes. Israel says it is reasonably defending its border.

This was an unusually quiet day, but you could still hear what sounded like occasional gunshots from sniper positions. Sirens blared behind the fence inside Gaza. I had stood on that side during previous demonstrations, taking cover behind a sturdy ambulance in a field. Now, I was with the Israeli army on the other, meeting its commanders.