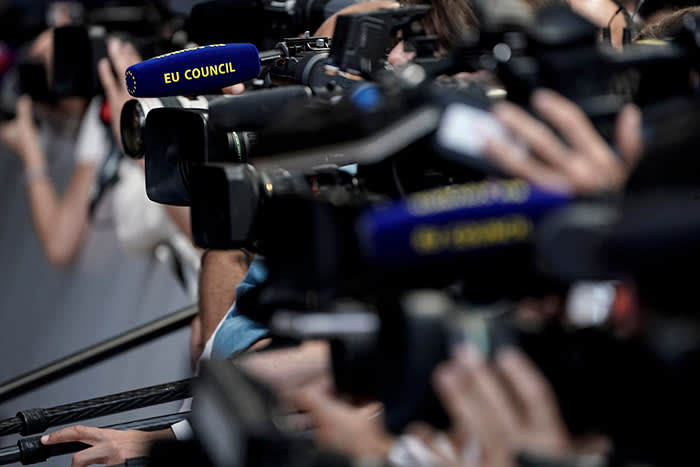 Goodbye Brussels: what I learnt in eight years covering the EU

Outgoing FT bureau chief, Alex Barker,reflects on a turbulent time, from eurozone crisis to Brexit
Brussels wasn’t supposed to make me weep. Not at all. When I arrived in 2011 to join the FT’s four-strong bureau in the city, my job was to cover the intricacies of single market regulation. It never crossed my mind that reporting on the EU would overwhelm me with emotion or leave me physically shaken. But that was what the migration crisis would do. Nor was I expecting to see seasoned Greek journalists cry during a press conference.
Yet who could blame them? Athens was in its post-bailout-referendum slide of 2015, its government adrift, its battered economy taking one more wallop. Such was the claustrophobic pressure of the eurozone crisis, at one stage tears even came to the eyes of Chancellor Angela Merkel, the politician-survivor of this decade of European upheaval.
“Das ist nicht fair,” she told a group of world leaders in late 2011, when pressured to give more money to fund a financial firewall to protect the eurozone’s weakest members from the markets. Brussels is notorious as a supposed centre of faceless, grey bureaucracy, the dead hand of unelected administration, but it has never really deserved that tag. Here is the spot where the raw, tangled threads of a continent’s politics converge.
It’s where sleep-deprived leaders are trapped in summit rooms, sometimes for days. It is where Europe’s hardest problems come to be compressed and crushed until the pressure is so high, in the words of one summit veteran, “the politics turns fluid” — or breaks into the most vivid dramas.
…MORE