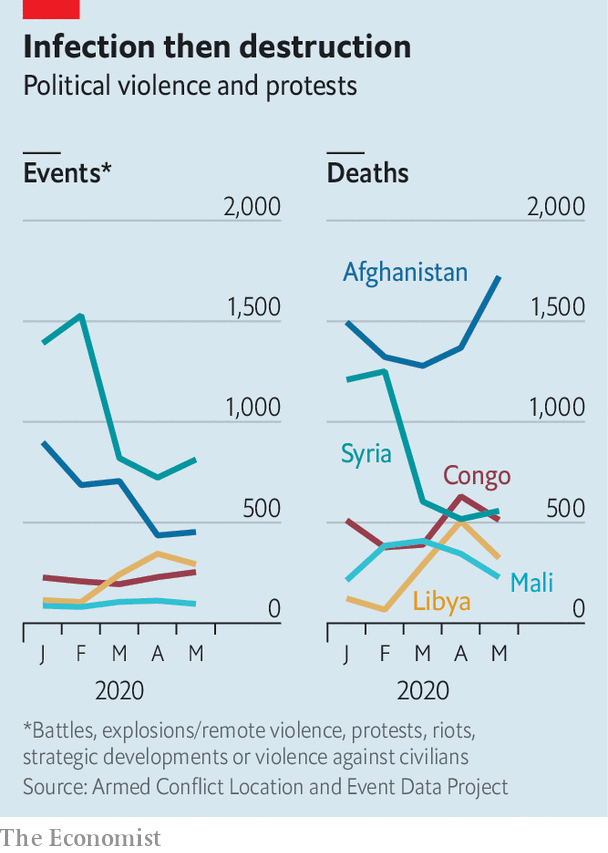 Bunia, a dusty city of perhaps 650,000 in Ituri, a province of eastern Congo, has long known war. Since the start of this year, rebels have burned dozens of villages to the ground and hacked hundreds of people to death with machetes. A rebel group made up of assailants from the seed-sowing Lendu tribe has launched a series of attacks on the pastoralist Hema. The government hospital in the city is overrun with patients. “We have people wounded with machetes, with gunshots, women with amputated limbs, people with fractures,” says John Katabuku, a doctor working there. “When the displaced arrive we look after them for free—they have lost everything. But it is difficult for the hospital. We really do not have the means.”

With war comes disease. Ituri is still recovering from an outbreak of Ebola which started in 2018 and killed 2,262 people in the region before subsiding. Now it has covid-19. Though there are just two recorded cases in the province, that is surely a woeful undercount. If the disease is spreading, it would not be easy to tell. Tests have to be sent 1,800km to the capital, Kinshasa. And few people can get tested. Some 22 clinics have been burned down. One man living in the nearby war-torn area of Djugu says that there is nowhere to go if you are sick—all the clinics are either ruined or occupied by rebels. The hospital in Bunia has no working ventilators and only enough space to isolate up to ten people, in the area that was previously being used for suspected Ebola patients. “We have to hospitalise two to three displaced children per bed, so you can see that we do not have infection prevention under control,” says Dr Katabuku.