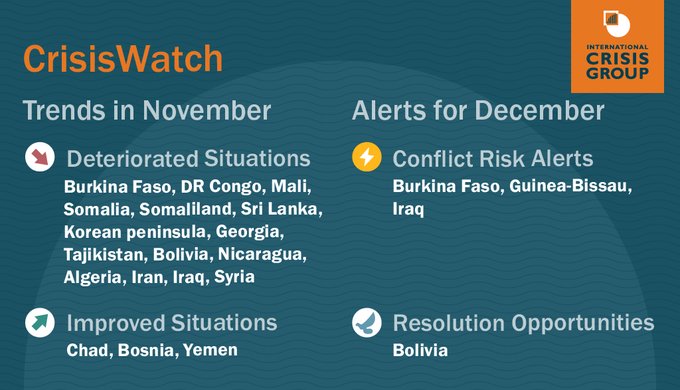 Crisis Group✔@CrisisGroup
What conflicts are at risk of deteriorating in the coming weeks and where are opportunities for steps toward peace? Our global conflict tracker #CrisisWatch just updated! http://bit.ly/2auBQI2
9:54 AM – Dec 4, 2019

In November, security forces in both Iraq and Iran brutally suppressed mass protests, with over 100 killed in both places; Iraq’s political instability could lead to more violence in coming weeks. In Syria, fighting escalated between Russian-backed government forces and rebels in the north west, and the standoff between Algeria’s authorities and protesters intensified as demonstrators turned up their calls to cancel December’s presidential polls. Violence against civilians surged in DR Congo’s east and Guinea-Bissau’s run-off elections in a few weeks’ time could spark unrest. In Burkina Faso and Mali, jihadists inflicted heavy losses on security forces and civilians, while in Tajikistan suspected ISIS militants reportedly attacked a border post in the south. In Asia, the victory of Gotabaya Rajapaksa in Sri Lanka’s presidential polls sparked fears of ethnic polarisation and repression. Political confrontation heightened in Somaliland, Somalia’s Galmudug state, Georgia and Nicaragua; and Bolivia’s crisis worsened, with security forces cracking down on protesters. Tensions rose on the Korean peninsula after an apparent resumption of North Korean missile launches. On a positive note, Bosnia named a prime minister after a thirteen-months hiatus. Chad’s government and a community defence group in the north signed a peace deal, and Yemen’s government entered a power-sharing agreement with separatists to end hostilities in the south.