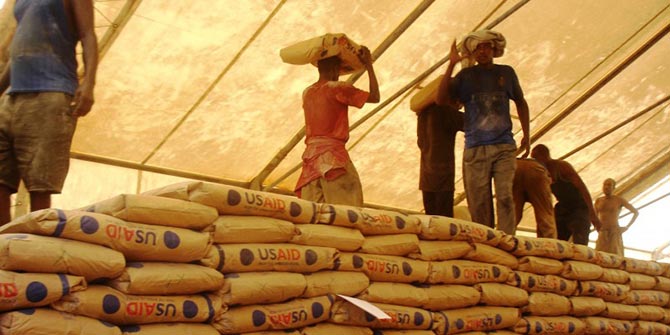 LSE’s Jason Hickel argues that the development industry needs an overhaul of strategy, not a change of language.

International development is dying; people just don’t buy it anymore. The West has been engaged in the project for more than six decades now, but the number of poor people in the world is growing, not shrinking, and inequality between rich and poor continues to widen instead of narrow. People know this, and they are abandoning the official story of development in droves. They no longer believe that foreign aid is some kind of silver bullet, that donating to charities will solve anything, or that Bono and Bill Gates can save the world.

This crisis of confidence has become so acute that the development community is scrambling to respond. The Gates Foundation recently spearheaded a process called the Narrative Project with some of the world’s biggest NGOs – Oxfam, Save the Children, One, etc. – in a last-ditch attempt to turn the tide of defection. They commissioned research to figure out what people thought about development, and their findings revealed a sea change in public attitudes. People are no longer moved by depictions of the poor as pitiable, voiceless “others” who need to be rescued by heroic white people – a racist narrative that has lost all its former currency; rather, they have come to see poverty as a matter of injustice.

These findings clearly demonstrate that people are beginning to reject the aid-centric approach to development. But instead of taking this as an opportunity to face up to their failures and change the way the industry works, the Gates Foundation and its partner NGOs have decided to stick with business as usual – but to cloak it with fresh language.

Leaked internal documents make it clear that the Narrative Project is nothing more than a PR campaign – a bid to “change public attitudes” by rolling out fresh language that will be more effective at securing public support and donations. The strategy goes like this: Talk about the poor as “equals” who share our values; emphasise that development is a “partnership”; stop casting rich people and celebrities as saviours of the poor; and above all, play up the idea of “self-reliance” and “independence”, with special attention to empowering women and girls. Progressive Westerners love this stuff.

This new framing amounts to little more than a propaganda strategy. Instead of changing their actual approach to development, the Narrative Project just wants to make people think they’re changing it. In the end, the existing aid paradigm remains intact, and the real problems remain unaddressed.