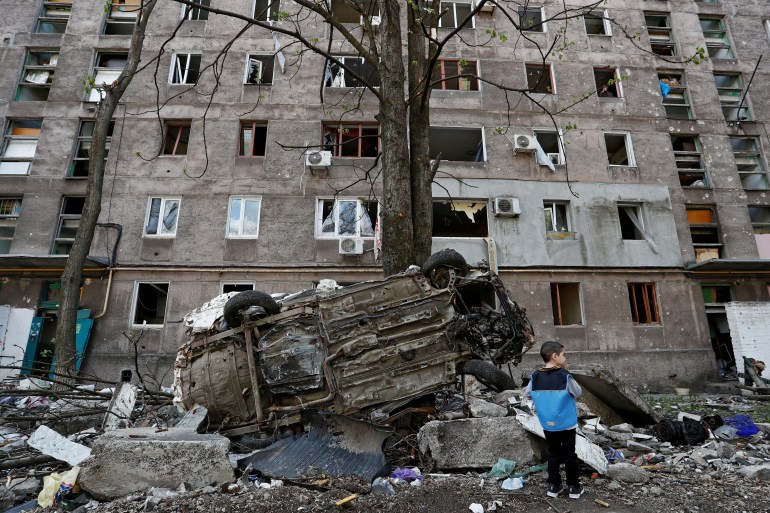 A boy stands next to a wrecked vehicle in front of an apartment building damaged during Ukraine-Russia conflict in the southern port city of Mariupol, Ukraine April 24, 2022.[Alexander Ermochenko/Reuters

The war in Ukraine, like all wars, was born of sin – a terrible sin that has so far led to the death of thousands, the destruction of entire cities and the displacement of millions, with untold ramifications for global security.

But whose sin was it?

It was certainly not Ukraine’s. The insistence of its inexperienced president on NATO membership may have been unwise, but it was no crime.

It must have been Russia’s, obviously. Or was it – albeit not so obvious – America’s sin?

Washington and its pundits regard Putin’s Kremlin as the source of all evil. They accuse the Russian president of harbouring authoritarian and imperial ambitions reminiscent of those seen in 19th century imperial Russia, and waging a bloody war to dismember or annex large parts of a sovereign state, Ukraine. They claim in the process he is destabilising Europe and changing the world order.

Moscow and its pundits, on the other hand, see Washington as the source of all international malevolence, interfering in Ukraine politics and using Kyiv to undermine Russia’s security. They claim the expansion of NATO right up to its borders left Moscow with no choice but to intervene to defend its vital interests and protect Russian nationals against Western supported “Ukrainian Nazis”.