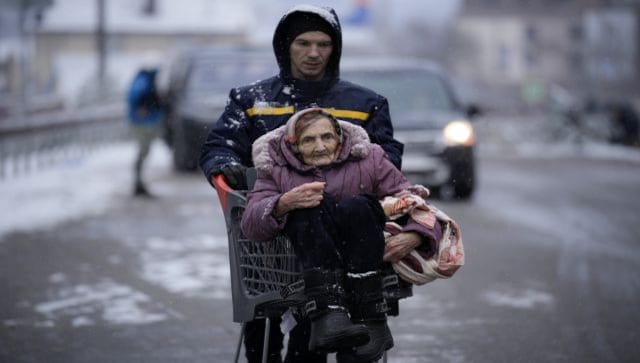 An elderly woman is carried in a shopping cart after being evacuated from Irpin, on the outskirts of Kyiv. AP

The two-week-long conflict has led to an overwhelming flow of information emanating from Russia and Ukraine; in several instances, the news has been misleading, with many sharing outlandish and bizarre claims on social media.

It’s been two weeks since Russia’s Vladimir Putin announced a “special military exercise” in certain parts of Ukraine, which later turned into a war against Ukraine. Since then, social media has been inundated with visual and most often heart-breaking images —ranging from children confronting soldiers to heavily damaged buildings.

Follow all LIVE updates from the Russia-Ukraine conflict here

However, with the war, as was the case with the coronavirus pandemic, a slew of misleading information has been put up, making it very hard to sift the real from the fake.

We examine a few of these instances and try to uncover the truth.

Shortly after the offensive began in Ukraine, social media was flooded with the heroic tale of ‘The Ghost of Kyiv’ — a rogue pilot in an old fighter jet shooting down five Russian aircraft in one day.

The official Ukraine Twitter account first coined the phrase with a cartoon drawing of a pilot – who was referred to as an ‘ace’ meaning the pilot must have shot down five or more aircraft.