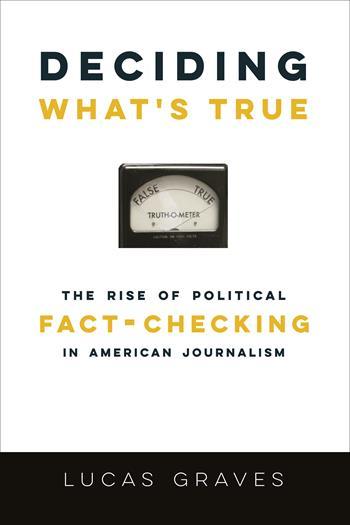 Over the past decade, American outlets such as PolitiFact, FactCheck.org, and the Washington Post‘s Fact Checker have shaken up the political world by holding public figures accountable for what they say. Cited across social and national news media, these verdicts can rattle a political campaign and send the White House press corps scrambling. Yet fact-checking is a fraught kind of journalism, one that challenges reporters’ traditional roles as objective observers and places them at the center of white-hot, real-time debates. As these journalists are the first to admit, in a hyperpartisan world, facts can easily slip into fiction, and decisions about which claims to investigate and how to judge them are frequently denounced as unfair play.

Deciding What’s True draws on Lucas Graves’s unique access to the members of the newsrooms leading this movement. Graves vividly recounts the routines of journalists at three of these hyperconnected, technologically innovative organizations and what informs their approach to a story. Graves also plots a compelling, personality-driven history of the fact-checking movement and its recent evolution from the blogosphere, reflecting on its revolutionary remaking of journalistic ethics and practice. His book demonstrates the ways these rising organizations depend on professional networks and media partnerships yet have also made inroads with the academic and philanthropic worlds. These networks have become a vital source of influence as fact-checking spreads around the world.

Lucas Graves is an assistant professor at the School of Journalism and Mass Communication at the University of Wisconsin. He is the coauthor of The Story So Far: What We Know About the Business of Digital Journalism (Columbia, 2011), and his writing has appeared in the Columbia Journalism Review, Wired, the New York Times, and other publications.

Journalism’s moment of reckoning has arrived

Maneuvering a new reality for US journalism