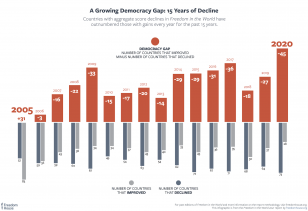 As a lethal pandemic, economic and physical insecurity, and violent conflict ravaged the world in 2020, democracy’s defenders sustained heavy new losses in their struggle against authoritarian foes, shifting the international balance in favor of tyranny. Incumbent leaders increasingly used force to crush opponents and settle scores, sometimes in the name of public health, while beleaguered activists—lacking effective international support—faced heavy jail sentences, torture, or murder in many settings.

These withering blows marked the 15th consecutive year of decline in global freedom. The countries experiencing deterioration outnumbered those with improvements by the largest margin recorded since the negative trend began in 2006. The long democratic recession is deepening.

The impact of the long-term democratic decline has become increasingly global in nature, broad enough to be felt by those living under the cruelest dictatorships, as well as by citizens of long-standing democracies. Nearly 75 percent of the world’s population lived in a country that faced deterioration last year. The ongoing decline has given rise to claims of democracy’s inherent inferiority. Proponents of this idea include official Chinese and Russian commentators seeking to strengthen their international influence while escaping accountability for abuses, as well as antidemocratic actors within democratic states who see an opportunity to consolidate power. They are both cheering the breakdown of democracy and exacerbating it, pitting themselves against the brave groups and individuals who have set out to reverse the damage. 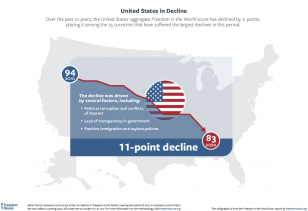 Global democracy continued its decline in 2020, according to the latest edition of the Democracy Index from our sister company, The Economist Intelligence Unit. The annual survey, which rates the state of democracy across 167 countries based on five measures—electoral process and pluralism, the functioning of government, political participation, democratic political culture and civil liberties—finds that just 8.4% of the world’s population live in a full democracy while more than a third live under authoritarian rule. The global score of 5.37 out of ten is the lowest recorded since the index began in 2006.
Government-imposed lockdowns and other pandemic-control measures led to a huge rollback of civil liberties in 2020, causing downgrades across the majority of countries. Confronted by a new, deadly disease to which humans had no natural immunity, most people concluded that preventing a catastrophic loss of life justified some temporary loss of freedom. The ranking penalised countries that withdrew civil liberties, failed to allow proper scrutiny of emergency powers or denied freedom of expression—regardless of whether there was public support for government measures. In France for example, severe lockdowns and national curfews led to a small but significant decrease in its overall score and the country dropped into the “flawed democracy” category.
…MORE
Democracy Index 2020
Full report
Read the report 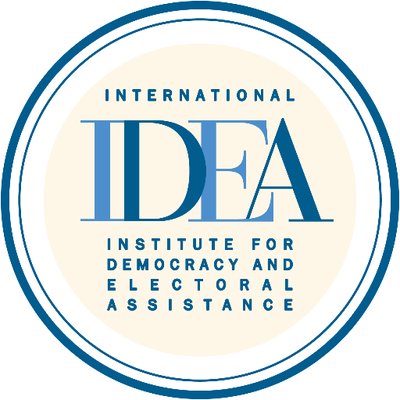 The year 2020 has seen the world besieged by a pandemic that has claimed millions of lives. The stability that most of the world enjoyed after the Cold War has perhaps been permanently disrupted, and all nations are struggling to adjust to these abrupt changes.
When the new millennium dawned, the 21st century was hailed optimistically  as the century of democracy. The future looked bright, as many erstwhile authoritarian and hybrid regimes, such as Armenia, the Gambia, Malaysia, Myanmar and Tunisia, became democracies. The will of the people as the only
legitimate form of authority seemed to be a popular and rapidly spreading ideal. Unfortunately, the Covid-19 pandemic has exacerbated a trend of increasing authoritarianism, across the globe, with many countries sliding back down the democratic scale.
Myanmar, which had been a fledgling democracy just beginning to recover from decades of military rule, fell victim to a military coup, the leaders of which even cited faulty elections as the justification for their course of action. Perhaps the greatest blow to democratic ideals was the fall of the people’s government in Afghanistan, which has seen war being waged for the sake of preserving democratic principles.
Significantly, the United States, the bastion of global democracy, fell victim to authoritarian tendencies itself, and was knocked down a significant number of steps on the democratic scale. Amid such geopolitical upheaval, the pandemic has raged on. Repeated outbreaks in different parts of the world simultaneously have made the disease all the more difficult to fight, and the toll it has taken has been grievous.
… MORE