Books of The Times

Robert M. Gates gives us a forthright, impassioned, sometimes conflicted account of his four and a half years as defense secretary in his fascinating new memoir “Duty,” a book that is highly revealing about decision making in both the Obama and Bush White Houses… MORE

The Washington Post Book review: ‘Duty: Memoirs of a Secretary at War’ by Robert M. Gates

Maybe it was the time of year, just before the Christmas holidays. Maybe it was the setting — a bare-bones combat outpost in the violent mountains of eastern Afghanistan. Maybe it was the strain of more than four years of signing deployment orders that he knew would lead to the deaths of more young Americans. But in December 2010, speaking to troops clustered around him,Robert M. Gates was overcome by an uncharacteristic flood of emotion… MORE

Among US public servants of his generation, Robert Gates is one of the few to command deep respect across the board. Though a registered Republican, and a Reagan-era hawk, the former defence secretary under George W Bush and Barack Obama may even be better liked by Democrats. Reticent, professional, discreet, bipartisan and diligent are all words that spring to mind. “Yoda” was his nickname among Obama’s people, in reference to the sapient Jedi knight in Star Wars… MORE

All too often during my 4½ years as secretary of defense, when I found myself sitting yet again at that witness table at yet another congressional hearing, I was tempted to stand up, slam the briefing book shut and quit on the spot. The exit lines were on the tip of my tongue: I may be the secretary of defense, but I am also an American citizen, and there is no son of a bitch in the world who can talk to me like that. I quit. Find somebody else. It was, I am confident, a fantasy widely shared throughout the executive branch.

Much of my frustration came from the exceptional offense I took at the consistently adversarial, even inquisition-like treatment of executive-branch officials by too many members of Congress across the political spectrum—creating a kangaroo-court environment in hearings, especially when television cameras were present. But my frustration also came from the excruciating difficulty of serving as a wartime defense secretary in today’s Washington. Throughout my tenure at the Pentagon, under both President George W. Bush and President Barack Obama, I was, in personal terms, treated better by the White House, Congress and the press for longer than almost anyone I could remember in a senior U.S. government job. So why did I feel I was constantly at war with everybody? Why was I so often so angry? Why did I so dislike being back in government and in Washington?

It was because, despite everyone being «nice» to me, getting anything consequential done was so damnably difficult—even in the midst of two wars. I did not just have to wage war in Afghanistan and Iraq and against al Qaeda; I also had to battle the bureaucratic inertia of the Pentagon, surmount internal conflicts within both administrations, avoid the partisan abyss in Congress, evade the single-minded parochial self-interest of so many members of Congress and resist the magnetic pull exercised by the White House, especially in the Obama administration, to bring everything under its control and micromanagement. Over time, the broad dysfunction of today’s Washington wore me down, especially as I tried to maintain a public posture of nonpartisan calm, reason and conciliation.

I was brought in to help salvage the wars in Iraq and Afghanistan—both going badly when I replaced Donald Rumsfeld in December 2006. When I was sworn in, my goals for both wars were relatively modest, but they seemed nearly unattainable. In Iraq, I hoped we could stabilize the country so that when U.S. forces departed, the war wouldn’t be viewed as a strategic defeat for the U.S. or a failure with global consequences; in Afghanistan, I sought an Afghan government and army strong enough to prevent the Taliban from returning to power and al Qaeda from returning to use the country again as a launch pad for terror. Fortunately, I believe my minimalist goals were achieved in Iraq and remain within reach in Afghanistan.

A Look at Robert Gates 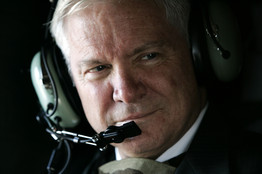 President Bush always detested the notion, but our later challenges in Afghanistan—especially the return of the Taliban in force by the time I reported for duty—were, I believe, significantly compounded by the invasion of Iraq. Resources and senior-level attention were diverted from Afghanistan. U.S. goals in Afghanistan—a properly sized, competent Afghan national army and police, a working democracy with at least a minimally effective and less corrupt central government—were embarrassingly ambitious and historically naive compared with the meager human and financial resources committed to the task, at least before 2009.

For his part, President Obama simply wanted to end the «bad» war in Iraq and limit the U.S. role in the «good» war in Afghanistan. His fundamental problem in Afghanistan was that his political and philosophical preferences for winding down the U.S. role conflicted with his own pro-war public rhetoric (especially during the 2008 campaign), the nearly unanimous recommendations of his senior civilian and military advisers at the Departments of State and Defense, and the realities on the ground.

The continuing fight over Afghanistan strategy in the Obama administration led to a helpful, steady narrowing of our objectives and ambitions. Still, I witnessed a good deal of wishful thinking in the Obama administration about how much improvement we might see with enough dialogue with Pakistan and enough civilian assistance to the Afghan government and people. When real improvements in those areas failed to materialize, too many people—especially in the White House—concluded that the president’s entire strategy, including the military component, was a failure and became eager to reverse course… MORE

—Dr. Gates was the 22nd secretary of defense. This essay is adapted from his latest book, «Duty: Memoirs of a Secretary at War,» to be published next Tuesday by Knopf.

We also knew, or should have known, what is being revealed about Robert Gates, although the public imaging success that this master of reputation preservation has enjoyed through the years has made that sort of insight less obvious. Gates has throughout his career been especially adept at seeing that responsibility and accountability for what is unsuccessful, untoward, or unpopular stops at levels just below his own. This has included levels inhabited by members of the uniformed military on whose behalf he has presented himself as a defender. Now it appears that the sort of blame-shifting techniques that he has long employed downward he also—having walked out the door of public service—can use sideways and upwards as well… MORE

More from other sources