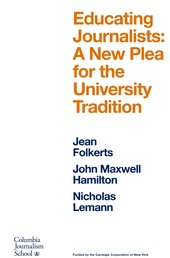 This is a report by former journalism school deans Nicholas Lemann of Columbia Journalism School, Jean Folkerts of the University of North Carolina, John Maxwell Hamilton of Louisiana State University, was released today. At 25,000 words, the report is one of the most ambitious single documents published in a generation about journalism education.Dean Steve Coll will host the authors at a recorded and live-streamed event on Tuesday, October 15th at 5:00 p.m. EST. The event is viewable here.

“The debate over journalism education has too often been characterized as a struggle between professionals and academics,” said Folkerts.  “We hope this report demonstrates the potential for professionals and educators working together in a university setting to conduct research and develop skills that will create leaders in a changing profession.”  The report is funded by the Carnegie Corporation of New York, and was borne out of the Carnegie-Knight Initiative on the Future of Journalism Education.Journalism is in one of its recurring periods of being dramatically remade, and this has brought renewed attention to journalism education.

All this is wonderful, but one can’t get very far into thinking about how to turn the current moment’s possibilities into a real program without running into a series of questions about journalism education that long predate the advent of the Internet. How should a university endeavor to teach someone how to be a journalist? How academic should journalism education be, and how much like professional practice? How much should it focus on the skills and modes of presentation associated with journalism, and how much on understanding the subjects journalists cover? Who should teach in journalism schools?

These questions were being debated even before Washington College in Virginia, now Washington and Lee, began teaching journalism to undergraduates in the late 1860s, and before the University of Missouri opened the country’s first separate school of journalism in 1908. When Vartan Gregorian was appointed president of the Carnegie Corporation, for decades the most influential funder of American higher education, in 1997, he told an interviewer from the New York Times that journalism education would be one of his top priorities—because he found it deficient.

“Journalism schools are teaching journalistic techniques rather than subject matter,” he said. “Journalists should be cultured people who know about history, economics, science. Instead they are learning what is called nuts and bolts. Like schools of education, journalism schools should either be reintegrated intellectually into the university or they should be abolished.”

Variants of Gregorian’s opinion have been around for almost the entire history of journalism education. Through the twentieth century, a series of reports and studies have treated it rather dismissively—at best as a problem waiting to be solved. At the same time, journalism education has grown into a significant sector in American higher education, and it is beginning to grow elsewhere in the world. There are 115 accredited journalism programs in the United States, and at least twice that many unaccredited ones. All but a handful of these teach mainly undergraduates, and they teach other fields of communication—advertising, marketing, public relations, and more—along with journalism…