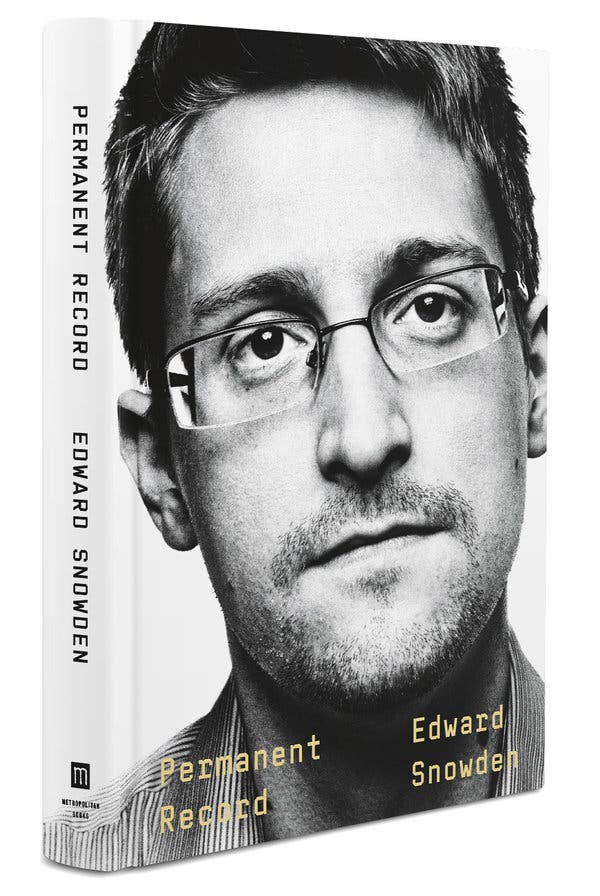 Revealing state secrets is hard, but revealing yourself in a memoir might be harder. As Edward Snowden puts it in the preface of “Permanent Record”: “The decision to come forward with evidence of government wrongdoing was easier for me to make than the decision, here, to give an account of my life.”

Snowden, of course, is the former intelligence contractor who, in 2013, leaked documents about the United States government’s surveillance programs, dispelling any notions that the National Security Agency and its allies were playing a quaint game of spy vs. spy, limiting their dragnet to specific persons of interest. Technological change and the calamity of 9/11 yielded new tools for mass surveillance and the incentive to use them.

Sweeping up phone records of Americans citizens, eavesdropping on foreign leaders, harvesting data from internet activity: For revealing these secret programs and more, Snowden was deemed a traitor by the Obama administration, which charged him with violating the Espionage Act and revoked his passport, effectively stranding Snowden in Moscow, where he has been living ever since.

“Permanent Record” is a riveting account and a curious artifact. The book is unlikely to change anyone’s mind about Snowden, but when it comes to privacy and speech and the Constitution, his story clarifies the stakes. For someone who worked in the intelligence community, the very idea of an autobiography feels uncomfortable. “It’s hard to have spent so much of my life trying to avoid identification,” he writes, “only to turn around completely and share ‘personal disclosures’ in a book.”

Notice the scare quotes; Snowden is instinctively careful about entering anything about himself into the permanent record of “Permanent Record.” The man who emerges from such “personal disclosures” seems consequently guarded and meticulous — ideal traits for a spy or a whistle-blower.

Born in 1983 in North Carolina, Snowden comes from a family whose service includes the F.B.I. (his grandfather), the Coast Guard (his father), the N.S.A. (his mother) and the Army (himself). He remembers the first thing he ever hacked was bedtime, changing all the clocks in the house so that he could stay up later on his sixth birthday. As a teenager, Snowden learned how to hack school, examining the class syllabus to figure out how he could exploit its weaknesses; the goal was to do the least amount of work without flunking out.

School was at best a distraction, he says, and at worst “an illegitimate system” that “wouldn’t recognize any legitimate dissent.” He preferred to spend time on “something new called the internet,” a “goddamned miracle” that was still distinctly human and profoundly weird, before monetization and surveillance set in. The internet of the 1990s was a liberating space, he says, where adopting and discarding different avatars could open up possibilities for more authentic expression and connection.