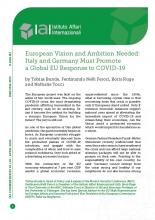 The European project was built on the ashes of two world wars. The ongoing COVID-19 crisis, the most devastating pandemic afflicting humankind in the last century, may be its undoing. Or can it become the catalyst for building a stronger European Union for the future? The jury is still out.
As one of the epicentres of this global pandemic, the quest inevitably begins at home. As European countries struggle to reach and eventually descend from the protracted plateau of COVID-19 infections, and grapple with the complexities of when and how to ease national lockdowns, they look ahead at a desolating economic horizon.

With the contraction of the EU economy estimated at 7 per cent GDP amidst a global economic recession unprecedented since the 1930s, what is becoming crystal clear is that recovering from this crisis is possible only if Europeans stand united. Only if common economic measures support national ones aimed at alleviating the immediate impact of COVID-19 and relaunching their economies, can the Union avoid a protracted recession which would imperil its foundations as a whole.

German Federal President Frank-Walter Steinmeier recently underscored that even those who seem to have weathered the crisis and can afford large national stimulus packages will not be able to prosper on their own. Pointing to the responsibility of his own country, he said: “Germany cannot emerge from the crisis strong and healthy if our neighbours do not also become strong and healthy.”[1]

This realization has already led to several concrete steps. From the suspension of the Stability and Growth Pact and the European Central Bank’s temporary asset purchase programme, to a European unemployment scheme, the European Investment Bank’s loan guarantees and the revision of the European Stability Mechanism, key decisions have been taken.