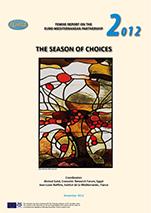 FEMISE has just released its 2012 annual report on the Euro-Mediterranean Partnership and the status of the Southern Mediterranean countries. This year’s report is entitled “The Season of Choices“.

The first part of the report addresses in its 3 main chapters the challenges that the South Med countries are currently facing after the fall of old authoritarian bargains in some countries, either on the economic, social or political fronts and the choices currently offered to them to move forward and plan for an overall reform strategy. This strategy will have to find the right growth model that should be inclusive and strong, to enhance an intelligent openness with a careful management and give a boost to the south-south integration and to implement reforms on the social front and encouraging entrepreneurship.

The first chapter presents the Short-term Challenges and Long-term Stability, based on the overall macroeconomic situation as of autumn 2012, highlighting growth conditions, macroeconomic equilibria and the evolution of the inclusive nature of growth. It concludes with recommendations on the efforts to be undertaken, building a vision for the youth and on the necessary involvement of the EU.

The second chapter comes back to the The Long Journey out from the Authoritarian Bargain  model since the accession to power of the new governments.

The third chapter, entitled Opening up intelligently, details the results of the policy of openness and external questions about the margins of progress that could still be made, particularly with regard to the evolution of non- tariff impediments, especially non-tariff barriers. It offers recommendations concerning the future of the policy of openness,

Currently, Turkey is the world’s sixteenth largest economy, with 74 million inhabitants and per capita annual income above US$9,000 (World Bank, 2010). By 2010, it was perceived to have weathered the 2008 crisis relatively well and this robust performance continued in 2011. Short-run prospects are healthy but they will be clouded by an uncertain and sluggish external environment. Moreover, a high current account deficit remains a threat to financial stability in case of a sudden stop or reversal of capital inflows which could be the result of global risk aversion sentiment triggered by an event even outside the country. Structural reforms are thus needed to deliver a permanent improvement in the current account deficit. Areas of reforms that would enable Turkey to sustain high growth rates without excessively high current account deficits include:

√ Improving the composition of capital inflows (so that they become dominated by more stable FDI inflows relative to more volatile portfolio investments) is important mitigate the vulnerability to sudden stops and would also improve the trade balance.

√ Improving energy self-sufficiency (estimated around 30% in 2008) to reduce energy import dependency. In this context, the government plans to supply 5% of energy by 2020 from nuclear power plants, and obtain 30% of electricity generation from renewable sources by 2023.In the long-term, inclusive growth requires notonly high and stable growth but also shared growth across regions, sectors, and social groups.To achieve this, it is recommended that:

√ Macroeconomic stability must be maintained especially given Turkey’s recent history of financial turbulence which have had high costs in terms of excessive output volatility and lower growth,√ Increasing employment would first require enhancing skills, productivity, and adaptability. In this regard, an action plan to strengthen links between vocational education and employment was issued in 2010, with 37 priorities, including establishing a national skills classification system, revising vocational school curricula according to new skill groups, and closer co-operation with employers on new vocational courses (OECD, 2012).

It would also require introducing more flexible regulation in the labour market related to minimum wages, severance payments and social security contributions in order to increase employment and productivity growth. These measures should also contribute to reduce the size of the informal sector. OECD (2012) estimates that if Turkey were to increase labor participation (from 49% in 2012 to 60% by 2030 ) and the average years of schooling (to 10 years during the same period), then GDP growth would rise GDP growth by 1.3 percentage points annually relative to the baseline over 2012-30 and potential output would increase by 25% by 2030.

√ Reducing large and persistent regional disparities. “Lagging” regions (Eastern Anatolia, Southeastern Anatolia and Black Sea) account for 40% of land area, 30% of population, but less than 20% of the economy’s income, and their per capita GDP is only 60% of the national average. In order to connect lagging regions to the centre, it is important to remove infrastructure bottlenecks (power and telecommunications lines, highways, railroads, port and airport facilities) and ensure market access.

√ Improving infant mortality rate ( 17 infant deaths per 1000 births), which is the highest in the OECD and more than three times higher than the OECD average of 4.6.

√ Improving access to services: At 64.1% of the Turkish population satisfaction with water quality is also the lowest in the OECD, well below the average of 86.1%.