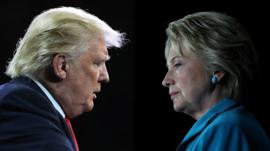 The US presidential election looks set to be a showdown between Hillary Clinton and Donald Trump, and the parlour game of picking a winner is kicking off worldwide.

Opinion polls this election season have been notoriously off the mark, with many underestimating the rise of Donald Trump, and the enduring appeal of Bernie Sanders’ message, especially among the country’s youth.

But there are other ways we can try and predict the outcome, as Rajini Vaidyanathan finds out.