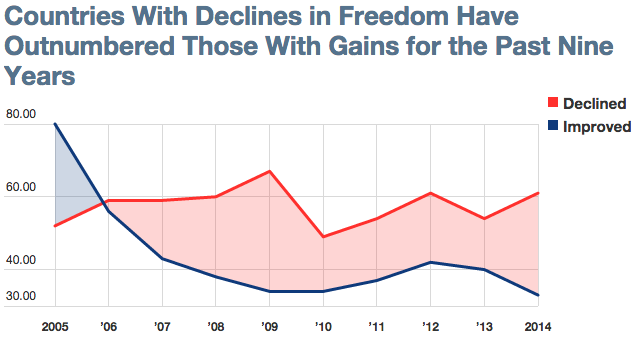 The invaluable annual report on “Freedom in the World 2015” from Freedom House has just been published. The bottom line is grim:

More aggressive tactics by authoritarian regimes and an upsurge in terrorist attacks contributed to a disturbing decline in global freedom in 2014. Freedom in the World 2015 found an overall drop in freedom for the ninth consecutive year. Nearly twice as many countries suffered declines as registered gains—61 to 33—and the number of countries with improvements hit its lowest point since the nine-year erosion began.

Two citations to make the point. Fawaz Gerges of the London School of Economics in his book Obama and the Middle East: the End of America’s Moment? wrote that

Obama came closer to the dominant realist approach to American foreign policy toward the region, an approach that aimed at retaining the status quo through backing pro-Western rulers and eschewing moral imperatives, such as the promotion of the rule of law and human rights.

Is that fair? In December 2014 Tom Carothers of the Carnegie Endowment write an op-ed entitled “Why Is the United States Shortchanging Its Commitment to Democracy?” There Carothers wrote this:

U.S. assistance to advance democracy worldwide is in decline. Such spending has shrunk by 28 percent during Barack Obama’s presidency and is now less than $2 billion per year. The decline has been especially severe at the U.S. Agency for International Development, which traditionally funds the bulk of U.S. democracy assistance and established itself in the 1990s as the largest source of such aid worldwide….Why this striking reduction in democracy aid? It is not a product of a broader contraction of U.S. foreign aid spending, which remains robust overall. Rather, it is a policy choice, reflecting both skepticism about the relative importance of democracy work by senior U.S. aid officials and, more generally, the muted emphasis on democracy-building by the Obama foreign policy team.

It is impossible to prove a negative–to demonstrate that had the Obama administration not shrunk democracy assistance, not adopted what it may view as a ‘realpolitik’ attitude of indifference to human rights advances, not backed so many dictators–freedom in the world would not have declined every single year that Mr. Obama has been president. But it is possible to wonder, and it is possible to wish that someone, somewhere in the White House were also wondering. 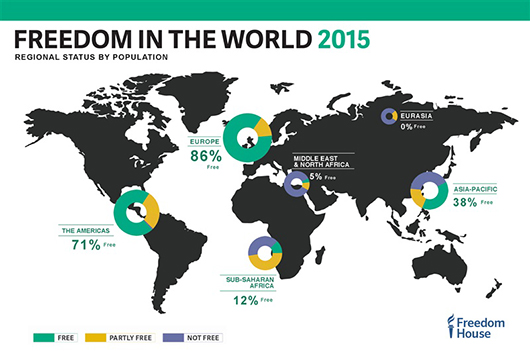