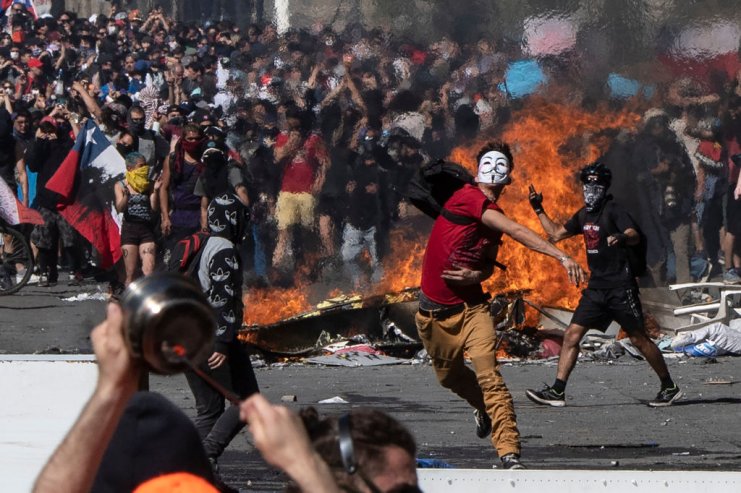 People demonstrate at Plaza Italia in Santiago, Chile on October 22, 2019, during the first week of protests over inequality and cost of living. Pedro Ugarte—AFP/Getty Images (v @TIME)

With high-profile protests raging across Chile, Colombia, Hong Kong, Sudan, Algeria, Lebanon, India, Spain, France and more, last year it often felt as if much of the world was out in the streets.

A lot of it was. A report published Thursday by risk consultancy Verisk Maplecroft finds that a quarter of the world’s countries experienced a “surge” in civil unrest in 2019. And, the report’s authors say, that unrest is unlikely to die down in 2020.

Last year’s protests, spanning South America, Asia, Africa, the Middle East and Europe, have been compared to the late 1960’s, when civil rights, anti-war and anti-colonial movements, combined with the growth of a youth-led counter culture, prompted dramatic street protests in dozens of countries.

To understand what’s driving the current wave of discontent, and why it’s unlikely to recede this year, Verisk Maplecroft looked at what happened before protests broke out in the 47 countries that experienced an uptick of unrest in 2019.

Can they lead to lasting change?  Bill Wanlund

Protest movements swept the globe last year — so widely that some experts said there were more protests, and more protesters, in 2019 than at any other time in history. Millions of citizens in dozens of countries took to the streets to protest a host of grievances, ranging from higher consumer prices to government corruption and social inequality. Thousands died; national leaders were forced from office. Experts differ on whether the wave of protests is a sign of failing democracy or of healthy citizen empowerment. But the deadly global spread of the coronavirus this year halted most street protests, at least temporarily, as governments enforced social distancing restrictions in hopes of preventing further infections — and perhaps in some cases in hopes of breaking the protests’ momentum. Many movements took their campaigns online, but how successfully remains to be seen. Social media enables protesters to organize effectively and promote their causes widely. Yet some observers argue that a social media campaign dissipates quickly if organizers cannot meet their followers’ expectations.

Enraged Lebanese took to the streets last Oct. 18 when their government announced a $6-a-month tax on calls made via WhatsApp and other online apps. One of the protesters in Beirut, Rayya Haddad, says, “As I was walking to my parents’ house, a friend texted me about the demonstrations starting, so I went. There were blocked streets, burning tires — all the country was up in revolt.”

Within hours, the Cabinet scrapped the tax proposal, which was supposed to help ease a lingering economic crisis and rescue Lebanon’s ailing telecommunications industry. But the demonstrations continued, and the “WhatsApp tax” protests morphed into what Haddad and her fellow protesters began calling a revolution.

On Oct. 29, 11 days after the protests began, Prime Minister Saad Hariri resigned — but even that did not satisfy anti-government demonstrators, who had swelled into the hundreds of thousands. “The protests … continued because people are fed up with government corruption and incompetence,” Haddad says.

Lebanon’s protests bear many of the characteristics of those that roiled the world last year: Seemingly mundane local events, like a WhatsApp tax, spark demonstrations, which in turn unleash anger about more fundamental grievances such as government incompetence or social and economic inequality. A report by the Center for Strategic and International Studies, a Washington think tank, found that more than 37 countries experienced massive anti-government movements in the last few months of 2019 alone. This continued a decade-long trend, during which mass political protests increased by an annual average of 11.5 percent, the center reported.

Protests rage around the world – but what comes next? (The Guardian)

Public Protests Around The World

A Leaderless Struggle for Democracy

Do today’s global protests have anything in common?