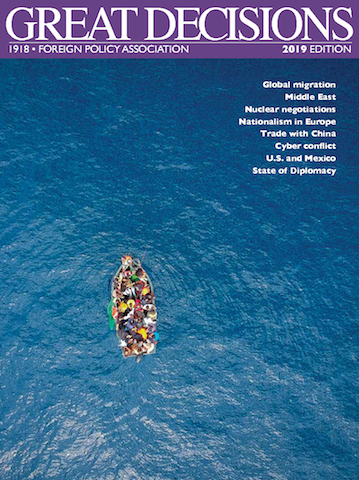 The topics for Great Decisions 2019! The eight topics are:

Today, no countries have open borders. Every state in today’s global system has its own laws and policies about who is permitted to cross its borders, and how they will do so. Who determines whether someone is a refugee or a migrant? How have different countries, including the United States, reacted to migration? How effective are the international laws, policies and organizations that have evolved to assist and protect refugees and migrants?

As the presidency of Donald J. Trump passes the halfway point, the Middle East remains a region in turmoil. The Trump administration has aligned itself with strongmen in Saudi Arabia, the United Arab Emirates and Egypt, which along with Israel have a common goal of frustrating Iranian expansion. What will be the fallout from policy reversals such as withdrawing from the Iranian nuclear accord and moving the U.S. embassy in Israel to Jerusalem? Does the United States see a path forward in troubled states such as Syria, Yemen, Libya and Iraq? Is the United States headed toward war with Iran?

Nuclear Negotiations: Back to the Future?

Nuclear weapons have not gone away, and the Trump administration has brought a new urgency, if not a new approach, to dealing with them.  The President has met with Vladimir Putin as the New Start Treaty with Russia comes up for renewal in 2021, the first presidential summit ever with Kim Jong-un occurred to discuss denuclearizing the Korean Peninsula, and President Trump has decertified the Obama nuclear deal with Iran.  To what degree should past nuclear talks guide future U.S. nuclear arms control negotiations?  Can the art of the deal apply to stabilizing our nuclear future?

The Rise of Populism in Europe

Mass migration, and the problems associated with it, have directly abetted the rise of populist parties in Europe. Opposition to immigration was the prime driver of support for Brexit, it brought a far-right party to the German Bundestag for the first time since the 1950s, and propelled Marine Le Pen to win a third of the vote in the French presidential election. In addition to calling for stronger borders, however, these parties are invariably illiberal, anti-American, anti-NATO and pro-Kremlin, making their rise a matter of serious concern for the national security interests of the United States.

Though arguably the most advanced economy in the world, the United States still uses centuries-old numbers to measure trade.  These antique numbers mangle understanding of the U.S.-China trade relationship, shrinking America’s true economic size and competitiveness, while swelling China’s.  Bad numbers give rise to bad policies that ultimately kill U.S. jobs and cede market share to China.  What other tools can the United States employ to counter China’s unfair trade practices?  There are several available, yet they remain mostly unused.

Cyber conflict is a new and continually developing threat, which can include foreign interference in elections, industrial sabotage and attacks on infrastructure. Russia has been accused of interfering in the 2016 presidential elections in the United States and China is highly committed to using cyberspace as a tool of national policy. Dealing with cyber conflict will require new ways of looking at 21st century warfare. Is the United States prepared to respond to such threats?

By Michael Shifter and Bruno Binetti

The United States and Mexico have a long, intertwined history, with both countries prominently featured in each other’s politics and agendas. The war on drugs, immigration and trade issues have taxed the relationship over the years. What impact will new leadership in both countries have on this crucial partnership?

State of the State Department and Diplomacy

During the Trump administration, the usual ways of conducting diplomacy have been upended. Many positions in the State Department have never been filled, and meetings with foreign leaders such as Kim Jong-un and Vladimir Putin have been undertaken with little advance planning. What effect are these changes having now, and how will they affect ongoing relationships between the United States and its allies and adversaries?