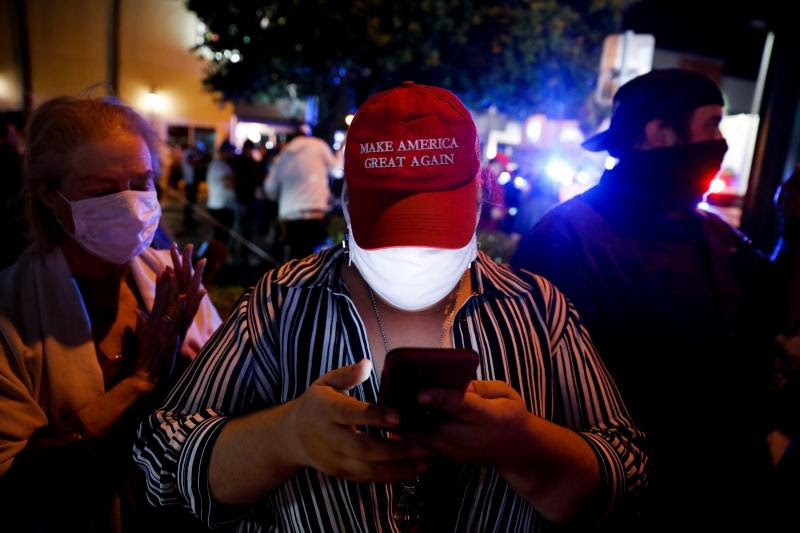 The 2016 U.S. presidential election propelled the threat of disinformation to the forefront of public debate. Americans were shocked by Russian attempts to influence voters by spreading misleading narratives. They had never imagined that a foreign power might use social media and other modern technologies to interfere in their elections.

Four years later, it seems that foreign adversaries were not able to meaningfully disrupt the 2020 U.S. presidential election—the U.S. Cybersecurity and Infrastructure Security Agency (CISA) declared this recent election “the most secure in American history.” But disinformation continues to circulate widely in the country as President Donald Trump refuses to concede to President-elect Joe Biden. Conspiracy theories about the legitimacy of the election’s outcome course through social media, fill the airwaves of certain partisan outlets, and spill from the White House itself. The current impasse is a reminder that disinformation is not just an inchoate foreign threat—it is also an American pathology.

Homegrown disinformation proliferated in this election year, including claims that so-called antifa militants started wildfires in the Pacific Northwest and assertions—fed by the mushrooming QAnon conspiracy—that Trump is saving the country from a powerful cabal of pedophiles. Such false and wild notions have blossomed in the societal fissures that have widened under Trump—between those who live in rural areas and those who live in cities, for instance, and those who see systemic racism as a major problem and those who don’t. These divisions have been exacerbated by the COVID-19 pandemic, four years of Trump’s populist rhetoric, and a social media environment that encourages outrage and extremism. The White House has sought to combat disinformation only when forced to and continues to put pressure on social media companies for its own political convenience—bristling, for instance, at content moderation decisions that affect the president, such as Twitter’s decision to label Trump’s tweets as suspect. Social media platforms have made temporary, surface-level changes to curb the spread of false claims, but they continue to profit from the very structures and imperatives that are now driving groups of Trump-supporting, reality-denying vigilantes to rally at ballot counting centers across the country.

Biden and his advisers seem to recognize the scale and scope of the problem. As a bridge builder and big-tent politician, the president-elect may be uniquely equipped to lead efforts to shore up American resilience to foreign and domestic disinformation. Biden is the lone American signatory of the Pledge for Election Integrity, a 2019 document drafted by the transatlantic nonprofit group Alliance of Democracies. The group of mostly European politicians who signed the pledge promised they would not “fabricate, use or spread data or materials that were falsified, fabricated, doxed or stolen for disinformation or propaganda purposes”; distribute deepfake videos; or utilize inauthentic means, such as bots, to amplify their messages. Biden should continue to lead by example and convince Democratic and Republican members of Congress and state and local officials to pledge to abide by these principles.

After four fractious years of politicization and polarization, however, it will take more than official pledges to address the degradation of public discourse in the United States and the manipulation of information by self-interested charlatans. The next administration will do better in this fight only if it pushes for new governmental structures and legislation. The president-elect’s record of bipartisanship presents an opportunity to push for clear, apolitical measures to safeguard American democracy from the toxic threat of disinformation.

HOW TO COUNTER DISINFORMATION

The Biden administration must first ensure that all levels of the federal government take the threat of disinformation seriously. This challenge should no longer be a subtopic discussed in hushed tones out of earshot of the president, as it was under Trump, who called disinformation “a hoax” and dismissed any action to counter it as censorship. As a result, the highest levels of the U.S. government never strongly condemned the spread of false messages, nor did the White House ever issue a unifying policy directive to guide agencies in working together to combat disinformation. A few small pockets of the government—notably the CISA, whose director, Christopher Krebs, was fired via presidential tweet this week—had to take on the gargantuan portfolio. But information operations concern every arm of the government. Other countries, such as the United Kingdom, appreciate the magnitude of the problem. The British government convenes foreign and domestic policy officials to develop plans for mitigating online threats and to respond to specific crises, such as the onslaught of Russian disinformation that followed the 2018 poisoning in the United Kingdom of the former Russian intelligence officer Sergei Skripal.

The United States should take a similar approach, creating a counter-disinformation czar within the National Security Council and setting up a corresponding directorate. This office would monitor the information ecosystem for threats and coordinate interagency policy responses. It would not try to serve any fact-checking or content moderation role, thereby avoiding accusations of censorship. Critically, the team would bring together ideas and opinions from outside the traditional national security and foreign policy realms, including from the Department of Education and organizations such as the National Endowment for the Humanities, two arms of government that deal directly with Americans. The new directorate would also encourage cooperation and information sharing with the private sector and with civil society groups.

With this more comprehensive bureaucratic structure in place, the Biden administration should then set its sights on Congress. Trump-era congressional hearings concerning online disinformation were mostly exercises in political theater, generating viral clips of members of Congress lambasting technology executives but no policy. Biden should lean on his bipartisan track record and encourage Congress to establish a federal commission for online oversight and transparency. Such a commission would make sure that social media platforms guard against malign foreign content and don’t fall prey to partisan bias. Legislators could compel social media companies to report on the decisions they make in devising algorithms and in moderating content, with the goal of building a more transparent and democratic Internet.