January 30, 2015 By Andrew Giambrone  The Atlantic

The French government releases new anti-jihadist literature Wednesday as part of a broader counterterrorism response to the Paris attacks.

How do you spot a radical jihadist? According to the French government, several signs should alert people that “a process of radicalization is underway.” “They” (meaning radicalized individuals):

mistrust old friends, whom they now consider ‘impure’… abruptly change their eating habits … no longer watch television or go to the movies because [these may show] images that are forbidden to them … change their attire, especially women, with clothes that conceal the body … [and] stop listening to music because it distracts them from their ‘mission.’ 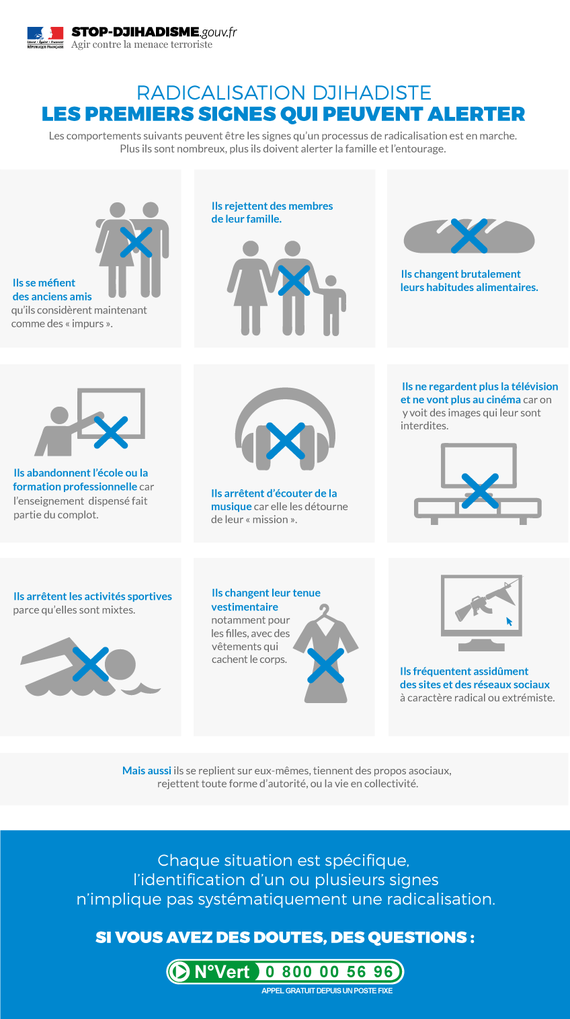 These individuals, the French government states in new anti-jihadist literature published Wednesday, also “withdraw into themselves, displaying antisocial behavior, rejecting every form of authority, or life in community.” Not unlike a Symptom Checker post on WebMD, the guidance contains a caveat: “The identification of one or more of these signs does not necessarily indicate radicalization.” So how exactly is someone in France supposed to tell the difference between ‘us’ and ‘them’?

That question has been on the minds of many since the deadly attacks earlier this month on the satirical magazine Charlie Hebdo and a kosher supermarket.