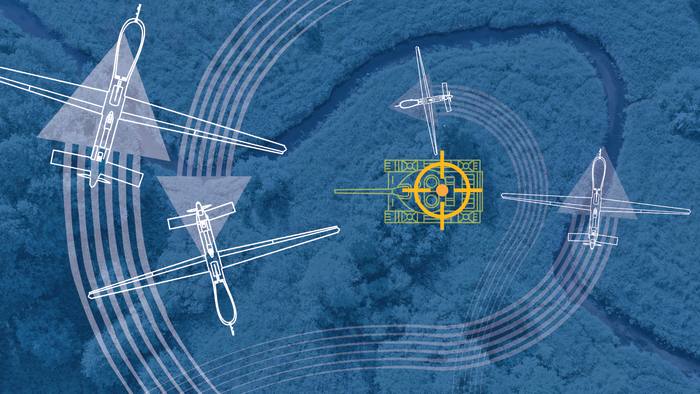 The assassination of Qassem Soleimani, Iran’s most senior general, in an attack by a US Reaper drone last week caused surprise. Over the past two decades, the US use of drones has escalated significantly, but the elimination of Soleimani was the first time the US had used the technology to kill another country’s senior military commander on foreign soil.

The MQ-9 drone used in the strike, fitted with Hellfire missiles, is deadly because of its combination of stealth, ability to fly higher than a commercial aircraft and capacity for carrying significant firepower.

Under the 2008-2016 administration of Barack Obama, drone strikes proliferated as a way of fighting the counter-insurgency in Iraq and Afghanistan without risking military personnel on dangerous air missions.

More recently, President Donald Trump has extended the use of drones beyond traditional conflict zones as the war on terror has been broadened into Yemen and Somalia. The US administration has shown itself willing to use the precision capability of drones to carry out assassinations. The escalatory nature of the attack on Soleimani, however, caught Washington’s friends and foes by surprise and marks a new chapter in the US drone wars.

Below are some milestones in drone use over the past 20 years:

1991 Drones first emerge in military use as a means of surveillance. During the first Gulf war, the US begins regularly using its Pioneer and Pointer drones for surveillance, including conducting aerial patrols along the Saudi-Kuwait border. “At least one UAV [unmanned aerial vehicle] was airborne at all times during Desert Storm,” a US Navy report published after the conflict said.

1993 The CIA buys five Gnat drones, designed by Leading Systems in California, and tests them in surveillance operations in the Balkan wars to monitor Serbian tank and troop movements. The Gnat is the early prototype for what becomes the Pentagon’s Predator drones.

2001 The evolution of the Predator takes a leap forward when the US military manages to fit the drone with missiles. This capability is tested as part of a failed CIA attempt to kill the Taliban’s supreme commander, Mullah Mohammed Omar, in October 2001. The drone fires too early, hitting an empty truck instead.

2002 The US strikes a group of men in eastern Afghanistan with a Predator drone, one of whom is thought to be Osama bin Laden, al-Qaeda’s leader. The identification turns out to be incorrect. 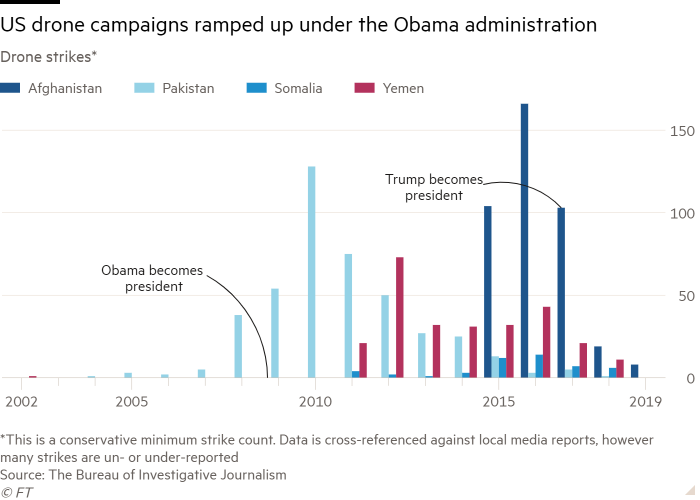 2008-2016 A total of 563 strikes, largely by drones, are made in Pakistan, Somalia and Yemen during Barack Obama’s two terms in office, according to the Bureau of Investigative Journalism (TBIJ). That compares with 57 strikes under the previous Bush administration.

Between 384 and 807 civilians are killed by strikes in those countries, TBIJ has calculated.

While this increased use of drone strikes attracts mounting criticism, and results in accidental civilian casualties, the White House argues that drones are “precision” instruments that avoid the collateral damage of aerial bombing campaigns.

2017 Under President Donald Trump, the US brings in new policies allowing expansion of armed drone activity outside conventional battlefields. This relaxing of rules — declaring parts of Somalia an “area of active hostilities” — gives US commanders latitude to carry out deadly strikes without believing that targets represent an active threat to America.

The administration launches between 114 and 124 drone strikes in Yemen, roughly three times as many strikes as in 2016, according to TBIJ.

The US also increases operations in Somalia, launching between 18 and 30 strikes, up from 14 in 2016. That rise is part of an increased commitment to fighting al-Shabaab and Isis in the country.

The conflict between the US and Iran intensifies when a missile and drone strike on Saudi Aramco’s largest oil-processing facility causes the biggest jump in oil prices in three decades. Iran denies responsibility for the attack, but Saudi Arabia says the strike was “unquestionably” sponsored by Tehran.

In January, Iranian general Qassem Soleimani is assassinated by a US drone while in a convoy near Baghdad airport. Nine other passengers are also killed, including Abu Mahdi al-Muhandis, leader of Iraqi Shia paramilitary group Kata’ib Hizbollah. While the capacity for such a strike has existed for some time, experts are surprised that Mr Trump decided to deploy it against such a high-level Iranian target. Graphics by Ian Bott 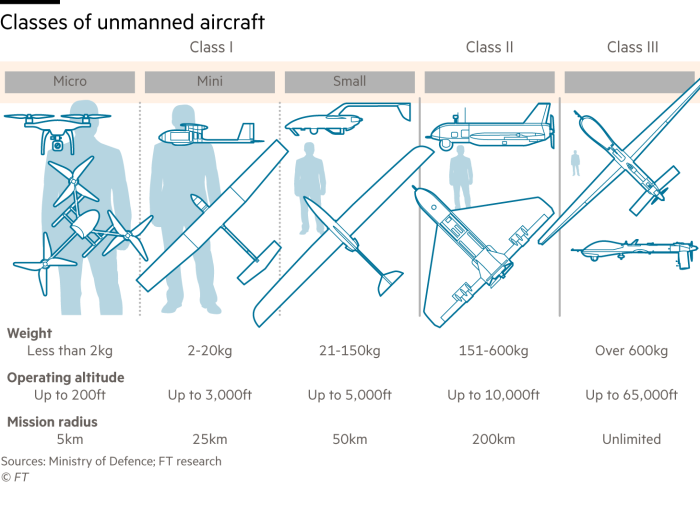