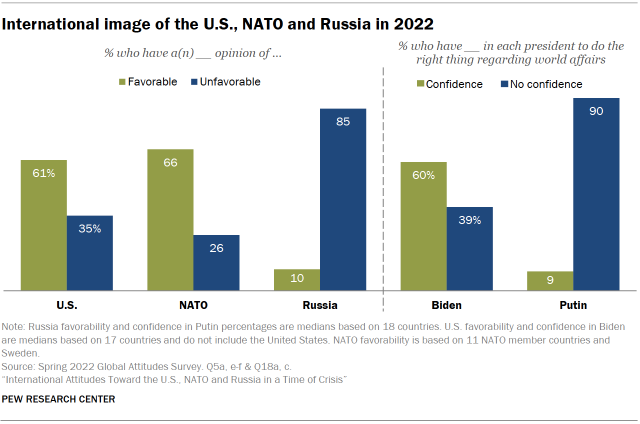 Most say the U.S. is a reliable partner, and ratings for Biden are mostly positive – although down significantly from last year.

Russia’s invasion of Ukraine has brought war to Europe at a scale unseen since the 1940s. In response, the United States and its NATO allies have supplied Ukrainian defense forces with weapons and training, while millions of refugees have fled into neighboring countries. The war has been the center of international attention for months, and as a new 18-nation Pew Research Center survey shows, it has had an impact on public opinion.

Ratings for Russia, which were already negative in most of the nations surveyed, have plummeted further following the invasion. In 10 countries, 10% or less of those polled express a favorable opinion of Russia. Positive views of Russian President Vladimir Putin are in single digits in more than half of the nations polled.

Attitudes toward NATO, in contrast, are largely positive, and ratings for the alliance have improved in several nations since last year, including Germany and the U.S., as well as nonmember Sweden. Swedish attitudes toward NATO grew increasingly positive over the course of the survey’s field dates.

Meanwhile, overall ratings for the U.S. are largely positive and stable. A median of 61% across 17 nations (not including the U.S.) express a favorable view of the U.S. Still, there have been some changes since last year, with favorable opinions increasing significantly in South Korea, Sweden and Australia, while declining significantly in Greece, Italy and France.