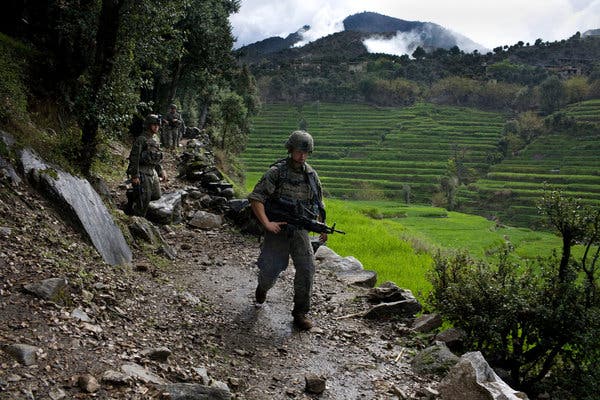 A soldier on patrol in the valley.CreditTyler Hicks/The New York Times

The second Platoon did not hide its dark mood as its soldiers waded across the Korengal River in the bright light of afternoon. It was early in April 2009 and early in the Pentagon’s resumption in earnest of the Afghan war. The platoon’s mission was to ascend a mountain slope and try to ambush the Taliban at night. They were about 30 men in all, riflemen and machine-gunners reinforced with scouts, a mix of original platoon members and replacements who filled gaps left by the wounded and the dead. Many of them considered their plan foolish, a draining and dangerous waste of time, another example of a frustrated Army unit’s trying to show activity for the brass in a war low on focus and hope. They muttered foul words as they moved.

Specialist Robert Soto had been haunted by dread as the soldiers left their base, the Korengal Outpost. His platoon was part of an infantry unit that called itself Viper, the radio call sign for Bravo Company, First Battalion of the 26th Infantry. Viper had occupied the outpost for nine months, a period in which its soldiers were confined to a small stretch of lower valley and impoverished villages clinging to hillsides beneath towering peaks. Second Platoon had started its deployment with three squads but suffered so many casualties that on this day even with replacements it mustered at about two-thirds strength. With attrition came knowledge. Soto knew firsthand that the war did not resemble the carefully considered national project the generals discussed in the news. He had enlisted in the Army from the Bronx less than two years before, motivated by a desire to protect the United States from another terrorist attack. But his idealism had turned swiftly into realism, and the war had become a matter of him and his friends surviving each day as days cohered into a tour. He was doubtful about the rest, from the competence of the war’s organizers down to the merits of this ambush patrol. There’s no way this works, he thought. The valley felt like a network of watchers who set up American platoons, relaying word to those laying traps.

Soto sensed eyes following the patrol. Everybody can see us.

He was 19, but at 160 pounds and barely needing to shave, he could pass for two years younger. He was nobody’s archetype of a fighter. A high school drama student, he joined the Army at 17 and planned to become an actor if he survived the war. Often he went about his duties with an enormous smile, singing no matter what anyone else thought — R. & B., rap, rock, hip-hop, the blues. All of this made him popular in the platoon, even as he had become tenser than his former self and older than his years; even as his friends and sergeants he admired were killed, leaving him a burden of ghosts.

US commander: No need for major change in Afghan war plan as new general takes over

ISIS never went away in Iraq

As Syria’s final battles looms, what comes next?

Beyond fragility: Syria and the challenges of reconstruction in fierce states