In a diplomatic breakthrough, the foreign ministers of arch rivals, the United States and Iran, hold their first talks on Tehran’s contested nuclear drive on Thursday, Sep 24, 2013. The landmark meeting between Secretary of State John Kerry and new Iranian Foreign Minister Mohammad Javad Zarif came as Tehran called for the easing of crippling international sanctions over its uranium enrichment. AFP VIDEOGRAPHIC 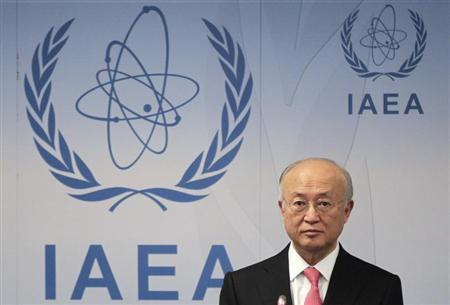 (Reuters) – Iran is making «steady progress» in expanding its nuclear program and international sanctions do not seem to be slowing it down, the U.N. nuclear agency chief told Reuters on Monday.

Yukiya Amano’s comments underlined the difficult challenges facing world powers in seeking to persuade the Islamic state to scale back nuclear activities they suspect could be used to make atomic bombs, a charge Tehran denies.

The surprise victory of moderate cleric Hassan Rohani in Iran’s presidential election last Friday has raised hopes for an easing of tension in the decade-old nuclear dispute.

Rohani pledged on Monday to be more transparent about Tehran’s atomic work in order to see sanctions lifted but he also said Iran was not ready to suspend its enrichment of uranium.

Amano, director general of the International Atomic Energy Agency, said he remained committed to dialogue with Iran to address the IAEA’s concerns about what it calls the possible military dimensions to the country’s nuclear program

On U.S.-Iran deal, devil is in the details

The feel-good mood engendered by promising overtures from Iran’s new president Hassan Rouhani and President Barack Obama has raised hopes for a settlement in the Iranian nuclear crisis. But the devil — especially in this case — is in the details.

The nuts-and-bolts of Iran’s nuclear program, and whether Tehran can give guarantees that it is not designed to make nuclear weapons will determine whether a deal with the United States is possible.

Here is a look at what Iran has achieved in a decade of intense nuclear work; what the main areas of concern are, and how the Iranian program can be reined in to give adequate guarantees that Iran does not seek the bomb.

In 2002, when Iran was discovered building two secret plants, one at Natanz to enrich uranium and the other that could make plutonium, the Islamic Republic had basically zero capability to make either of these strategic materials. Uranium and plutonium can be part of the fuel cycle that powers atomic reactors — but they are also the two main avenues toward building the explosive core of atom bombs.

Iran has pressed ahead over the past decade, building up its nuclear capabilities. It has continued even as the major powers carried out a diplomatic offensive to get Tehran to suspend both uranium enrichment and the construction of the Arak heavy-water plant, where plutonium could be produced… MORE

Dispelling Myths in the Path of a U.S.-Iran Nuclear Deal

Iran’s new president, Hasan Rouhani, is scheduled to address the U.N. General Assembly Tuesday and plans to use the occasion to reach out to world leaders about restarting talks on Iran’s controversial nuclear program. As U.S. President Barack Obama and his administration consider how they should react to the friendlier diplomatic face put forward by Rouhani and his team, they will need to contend with five popular myths about U.S. policy toward Iran’s nuclear program.

1. It’s Iraq all over again. No. For anti-war activists, simply invoking the Iraq War is an easy way to avoid making a fresh judgment on an independent issue. But there’s more than one letter of difference between the two cases. First of all, in 2003 the Bush administration lacked internationally certified evidence that Saddam Hussein’s regime was taking renewed steps toward producing nuclear weapons or even had the capabilities to produce the fissile materials needed for these bombs. All of the Bush administration’s arguments were based on U.S intelligence claims, which we now know were based in turn on extremely poor evidence. By contrast, Iran’s declared uranium enrichment progress is monitored and certified by the International Atomic Energy Agency (IAEA), which has determined that Iran violated its safeguards agreement with the agency. Iran’s missile tests are public knowledge. And many of the holes in our knowledge of the Iranian program result from Iran’s refusal to ratify an additional protocol to its IAEA safeguards agreement. The uncertainties that do exist surround Iran’s technical ability to make operable nuclear weapons from the highly enriched uranium its centrifuges produce and its intentions to produce such weapons-grade uranium and nuclear weapons.

2. Delay works in Iran’s favor. Not so far. Those who favor military action against Iran argue that Tehran has every incentive to drag out negotiations while it continues installing centrifuges, accumulating medium-enriched uranium and finishing construction of a heavy water reactor at Arak that can produce plutonium for nuclear weapons. All of these steps will provide Iran with multiple and redundant capabilities to build nuclear weapons, making a U.S.—and especially an Israeli—airstrike ever more difficult. Yet most experts estimate that airstrikes would set back Iran’s nuclear program by no more than a few years. By contrast, U.S. intelligence indicates that Iran has effectively shelved its dedicated weaponization program for the past decade because of Tehran’s desire to avoid producing new incriminating evidence that could be detected by international inspectors. From the perspective of 2003, that 10-year delay looks like a better deal than the military option. Whether that calculus will continue to hold is another matter… MORE

As part of its diplomatic charm offensive before this week’s United Nations General Assembly, Iran has released a dozen political prisoners, including my lawyer, Nasrin Sotoudeh. At the same time, President Hassan Rouhani published an op-ed in The Washington Post arguing his case for resolution of the nuclear crisis. In contrast to his hard-line and often unsophisticated predecessor, Mahmoud Ahmadinejad, Rouhani is rolling out a coherent and well-planned public campaign.

Sotoudeh, one of the best known freed political prisoners, was my lawyer in 2005 and helped free me and many others from Iran’s notorious Evin prison. But she paid a very high price for her courage, and was eventually locked up herself for more than three years. Her release did not have any of the conventional bureaucratic hallmarks. She was whisked out of her cell, put in a car, driven home and only told, “You are free.”

The authorities did not give Nasrin any papers to make her release permanent or official; she has no guarantees that she won’t be put back behind bars. Other freed political prisoners are in the same situation, while still many hundreds more remain incarcerated. Many of them are journalists, activists and reformist politicians who have done nothing more than press for reforms and justice for Iranian people.

Many of Iran’s political prisoners were jailed for airing critical opinions of the previous Iranian government’s domestic and foreign policies — critiques of Ahmadinejad’s policies similar to the arguments Rouhani is now making with such success in his speeches in Iran and in the American media.

Iranian journalists toil under severe censorship, social networking sites such as Twitter and Facebook are restricted, and Iranians generally have no free access to information. As a journalist persecuted for my writings in Iran, I find it remarkable that Rouhani can take advantage of press freedom in America, publishing op-eds and making media appearances while at the same time keeping prominent Iranian journalists imprisoned. When I hear Rouhani speaking of Iranian economic malaise, inflation, Ahmadinejad’s wrongheaded foreign policy, the need for reducing international tensions and so forth, I am reminded of my journalist friends behind bars whose lives have been destroyed… MORE

Echo of the old in new Iran leader’s U.N. speech

Breaking from his predecessor’s combative rhetoric, Hassan Rouhani spoke to concerns of both conservatives and liberals

Ken Pollack @nytopinion: Rouhani is genuine reformer, but desire to move Iran in new direction should not blind US… http://www.brookings.edu/research/opinions/2013/09/22-iran-nuclear-containment-pollack …

#Iran, the Bomb, and the Legal Standards of the IAEA: http://bit.ly/1dULr6Y #MiddleEast#nukes