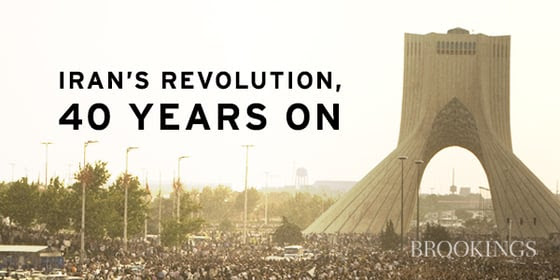 In 1979, Iran’s revolution shook the world, and its impacts are still being felt.

Forty years after the fall of the Shah and the creation of the Islamic Republic, a new series from the Brookings Foreign Policy program explores how the events of 1979 unfolded and how the revolution has affected U.S.-Iran relations and the Middle East at large.

Watch: Experts look back on Iran’s 1979 revolution and the US response

40 years later, the legacy of Iran’s revolution lives on in both Washington and Tehran

How Israel became a “useful enemy” for post-revolutionary Iran. Iranian-Israeli hostility can be traced directly to one period 40 years ago. Natan Sachs looks at how the events of 1979 turned friends into foes.

The Iranian revolution and its legacy of terrorism. «The 1979 Islamic Revolution in Iran has proved one of the most consequential events in the history of modern terrorism.» Daniel Byman explains how the revolution led to a surge in Iranian-backed terrorism that continues to this day.

Iran’s revolution and the problem of autocratic allies. How concerned should American foreign policy be with human rights and democracy promotion? Tamara Cofman Wittes examines how the overthrow of Iran’s “friendly” dictator in 1979 sparked this longstanding debate.

Iran and the headscarf protests. “It’s not about the clothes, it’s about the coercion.” Suzanne Maloney and Eliora Katz discuss how compulsory hijab became one of the essential and most controversial features of the Islamic Republic, leading to a wave of courageous activism among Iranian women today.