Former UK Prime Minister Tony Blair told BBC Newsnight daily life in Iraq on February 2013 was not what he hoped it would be when he opted to invade 10 years ago, but insisted that there had been «significant improvements», although «not nearly what it should be,» pointing in particular to on-going terror attacks.

However, he added, the situation under Saddam Hussein was far worse and, though the world was not safer than 10 years ago, on his view it was safer than it would be if he had remained in power. Mr Blair, speaking exclusively to Newsnight’s Kirsty Wark as part of a special programme marking the upcoming 10th anniversary of the US-led invasion of Iraq, which was broadcasted on Tuesday, February 26th, said he had given up trying to persuade people that invading Iraq was the right choice.

In a sense what I try to persuade people of now is to understand how complex and difficult a decision it was because I think if we don’t understand we won’t take the right decision about what I think will be a series of these types of problems that will arise over the next few years. You’ve got one in Syria right now, you’ve got one in Iran to come, the issue is how do you make the world a safer place? (Continue reading BBC’s main story)

As important or even more important than Blair’s self-justification of Iraq’s blunder is , as Conor Friedersdorf pointed out in The Atlantic on Feb 27, 2013, is «the sort of adversarial interview that American broadcasters (and from nearly every other country, I would add) should conduct with presidents». 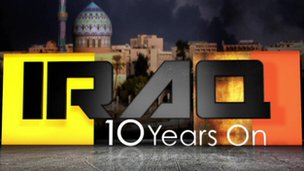 It’s riveting to watch. Note her willingness to ask uncomfortable questions, and her composed but adversarial attitude that borders at times on impertinence:

Set aside the issue of Iraq — whether you think the war was a mistake or not. Isn’t this how American broadcasters should interview our politicians? Shouldn’t things sometimes get heated? Isn’t it problematic that it’s hard to even imagine Steve Kroft telling President Obama that there are angry people who say he’s responsible for killing innocent children and is a war criminal?

Lots of people feel that way about Blair, and lots of people vehemently disagree. What I like about the video above is the way contentious issues are addressed head on, so that disagreement is actually aired. It even works out nicely for Blair, because he gets to really defend himself. It’s the sort of pressing interview that teases out the actual tensions in the subject’s thoughts.