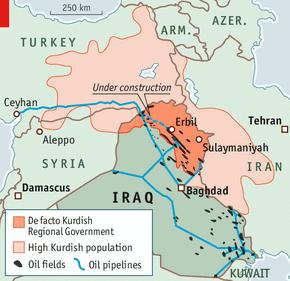 THE results of Iraqi Kurdistan’s general election, announced on October 2nd, were scarcely earth-shaking. The dominant party won a few more seats, with merely a faint whiff of impropriety. The long-declining share of its historical rival fell a bit more, and an upstart party confirmed its growing appeal.

Yet for this largely autonomous region of Iraq the lack of drama itself counts as a victory. Bounded by more powerful states, as well as by violent turmoil and ceaseless intrigue, Iraq’s 5m Kurds have carved out a zone of relative peace and prosperity. A terrorist attack in their capital, Erbil, on September 29th only underscored the anomaly. It was the first such incident in six years. The assailants killed six policemen, but failed to reach their target, the headquarters of the Kurds’ main security agency. By contrast, on the same day alone Iraq’s capital, Baghdad, was hit by at least a dozen bombs that left 55-plus people dead.

Iraq’s Kurds face some tricky challenges, starting with the task of forming a new coalition. Since winning self-rule in 1991, their region has been run by a duopoly. The Patriotic Union of Kurdistan (PUK) and the Kurdistan Democratic Party (KDP) represented not only differing ideologies but rival regions, clans and dialects. The KDP, loyal to the feudal Barzani family, controlled the western half, along the Turkish border. The socialist-leaning PUK, led by Jalal Talabani, dominated the east, adjacent to Iran. The two fought a vicious war in the 1990s, but for the past decade have shared spoils amicably. Mr Talabani took a job as Iraq’s overall president, leaving the presidency of the Kurdish region to the KDP chief, Masoud Barzani… MORE