Joshua  Kurlantzick doesn’t have any doubt that the world is losing faith in democracy. Comparing the main democratic indexes from 1989, it is difficult to disagree with him. As Carol J. Williams writes in her interview’s introduction with the author on March 30th, 2013 for Los Angeles Times, 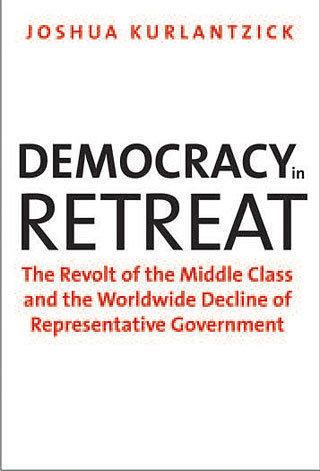 since then (…) democracy has been on the wane. Economics have been undermined by the global recession. Skimming public funds in secret has been replaced by blatant corruption. Fragile democratic institutions have been manipulated by autocrats masquerading as advocates of equality and freedom.

In his newly released book,  «Democracy in Retreat: The Revolt of the Middle Class and the Worldwide Decline of Representative Government” (Yale University Press, March 2013), writer and scholar Joshua Kurlantzick tracks the fate of emerging democracies, examines the causes of flagging enthusiasm for participatory democracy and ponders whether the decline is reversible.

Kurlantzick, who studies Southeast Asian politics and democratization at the CFR, discussed the trend in an interview with The Times.

Q: What recommends democracy — when, as you note, top-down economic development policies in places like China, Singapore and the gulf states sometimes provide better living standards?

JK: There is no strong evidence that authoritarian governments are better at providing development than democracies. I could name about 50 dictators who ran their countries into the ground economically. There is evidence that over time democracy provides better social welfare, such as longer life expectancy, lower infant mortality, more social and political freedoms…

DEMOCRACY LAB WEEKLY  Reporting on a world in transition @ForeignPolicy