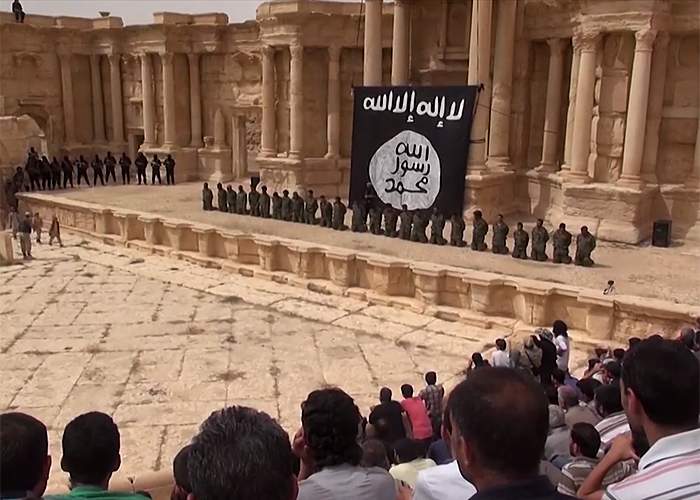 By Charlie Winter (Mohammad Ghannam in Beirut contributed to this story)

I’ve been researching propaganda issued by so-called Islamic State for some time now – it’s part of my day job. On a normal day, I’m desensitised.

I recognise that what’s before me is abhorrent but I rarely experience the full horror of what I’m exposed to.

However, on 4 July, one particular IS video caused my normal defence mechanisms to fail.

A group of teenage boys was lined up with 25 allegedly pro-Assad soldiers kneeling in front of them. The boys were pointing guns at the back of the soldiers’ heads. The stage for this chilling execution was Palmyra’s Roman Theatre.

As usual, I stopped the film before the act of killing itself.

It is now far easier for the Islamic State to conquer space in newsprint than hold actual territory: http://bit.ly/1mIKjMU

Islamic State’s motto is ‘Remaining and Expanding.’ The group is certainly not expanding right now, so it used a dramatic smokescreen to proclaim to the world it’s still here to stay.

The scariest thing about Islamic State? Its kinder, gentler side –By Jacqueline Lopour

Why the U.S. sticks with an ineffective strategy against Islamic militants –By Jason Fields

How ISIS Runs a City -By Thanassis Cambanis and Rebecca Collard