«Eating has to be fun», dice José Andrés a Anderson Cooper para 60 MINUTES: 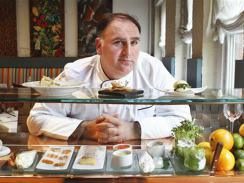 After rising to fame with the avant-garde cooking technique known as «molecular gastronomy,» Andres continues to wow diners in restaurants across the nation. And he’s even making his food known on the street, launching a successful food truck last year.

Andres has received a long list of culinary awards, including GQ magazine’s chef of the year, and his latest accolade is being named the «2012 American Chef of the Year» by The Daily Meal.

In the above video, watch the techniques that make Andres a stand-out chef and travel alongside Cooper as he tastes dishes that creatively embrace science and technology — including cotton candy wrapped seafood and a deconstructed New England clam chowder.